A Very Happy Mouse
It's been two days now since my airplane touched down with a violent clatter in London, England. That flight was all of the second I've ever been on, with the first occurring not too long before, in the form of a tiny little rattle-trap of an airplane traveling from Cleveland Hopkins to O'Hare in Chicago.

Yes, I managed to go 25 years without ever jetting off anywhere (purists may contend that the flight to California my mother embarked on while pregnant with me counts; I am not a purist), instead driving to and from Florida several times and New Orleans once. One drawback to driving (besides the time involved) is the endless bumping and jarring of the car over pot holes and uneven pavement. Interestingly, both airplanes I was in experienced something of the same. I felt as if I were driving, with slight up-and-downs and soft rocking of the cabin in which I was in. That there were no potholes to be bouncing over, merely thousands of feet of air, was a fact I tried not to focus on.

Make it I did, however, and I made it through Customs and over the border with no issues at all. 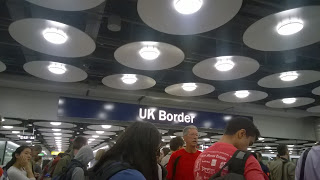 Next up: Purchase an Oyster card at Heathrow and ride the Piccadilly line for what felt like an hour (because it was) before transferring to the Jubilee line and disembarking at Southwark, from whence I had to lug my giant suitcase up several flights of stairs (there was a lift, but I'm not OLD so I proudly shunned it. Now my back hurts.). The walk from Southwark to Moonraker Point (the dorms where I'm living for the next three weeks) is only about five minutes, so it took me about ten to figure out where exactly I was going. Once there, around one in the afternoon, I discovered check-in wasn't until two, so myself and two others who were in the same unfortunate predicament dropped off our luggage and went for a leisurely hour-long stroll. That's one way of making new friends.

Upon waiting the appropriate amount of time and being able to officially check-in, I went to my room (on the sixth floor . . . this time I took the lifts) and attempted to settle myself in. I was pleasantly surprised, I have my own private bathroom, closet, desk, shelving, drawers, nightstand, and bed. And my window has a bit of a view, too, and not of a brick wall or an interesting alley way. 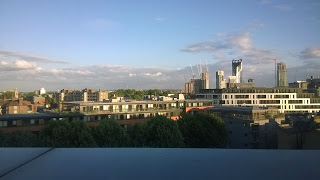 If I had to compare myself to an animal it would be a domestic cat. I enjoy my creature comforts and there are several people in my life I can be around for an extended period of time (you know who you are), but I also enjoy solitude and am perfectly happy rambling around by myself for hours on end. My first evening in London was spent just walking. I live on the south bank in Southwark, so I headed north, found a bridge, crossed it, and ended up meandering around the Strand, then over into Westminster. It's always fun rounding a corner and finding oneself in front of Big Ben. 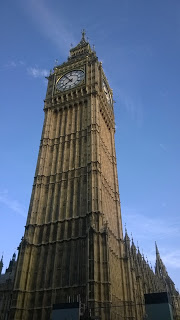 That all took place on Sunday, 5 July. On Monday, 6 July was the first day of classes, encompassing registration, a big assembly, and then splitting into class groups. There are twenty-three students in my class, including myself. Our professor, Susie, came up with a very interactive lesson plan, in which we discuss in groups questions on readings provided on King's E-Learning and Teaching Service (or KEATS, which is just the cutest acronym ever), and then present our answers to the class as a whole. All in all I enjoyed the setup, though I grieved over the classroom, which was less "Harry Potter" and more "stark white box." I do not presume, however, to pass judgement on so short an acquaintance, so we will have to wait till Day Two for that.

After class was an exciting social event at King's Strand Campus, which is much more along the lines of what I was expecting of a London school. The building occupies the East wing of Somerset House, the latter of which dates its origins to Cardinal Wolsey in the 1500s (although most of the original burned, a history that reads like basically every other historical building in London).

As a veritable social butterfly, I could barely contain my enthusiasm as I flitted from group to group, mingling and engaging with my summer school peers.

Not long after, I fell in with a girl from Hong Kong, who goes by Phoebe. We sat together and talked, drinking our beverages (soda for her, beer for me. I also had chips - fries - because I like to eat), discussing our respective home-countries, exclaiming over what we had in common and musing over our differences. We ended up being joined by a group of about six or seven of Phoebe's friends, all from Hong Kong, and we chatted as a group (they were kind enough to speak in English when addressing everyone, as I don't speak a lick of Cantonese). I ended up being invited to leave the event and get dinner with a group of four of my new friends - Phoebe, Carrie, David, and Sherman (the latter of whom is a girl). I thoroughly enjoyed myself (and the sushi we ended up eating).

And so the voluntarily-mandatory meet and greet turned out to be a success after all, leading us up to the goings-on of today.

7 July - Tuesday - we met at our regular classroom at 10 am sharp. This room is in the King's building at the Strand Campus, which is much more in line with my expectations about how a historical college in the heart of London SHOULD look like.

Interestingly, the vast majority of buildings I've been in here don't have air conditioning, so windows must be opened to combat the stagnating air, and those windows don't have screens. Such is the case in our classroom (and my dorm room, I have been forced to battle several fruit flies as a result).

Like the previous day's class, we again split into groups and discussed the day's readings, in this case the issue of London as a city and the challenges one faces in defining it as such. How does one define Londoners, the people themselves? Is London British? All pertinent questions when seeking to create and curate a museum focused on the city of London and featuring its many peoples, both past and present.

After our two-hour class and an hour break for lunch we all trekked down to the Museum of London, located in the City on London Wall. It really felt like going on a field trip, I half expected Susie to blow a whistle, raise her hand, and produce a rope for all of us to hold on to. It probably would've been easier that way, and she did end up carrying a black umbrella so everyone could see her properly.

I think of the use of maps to plot routes vs. actually traveling from point to point as a bit of a dichotomy, similar to the relationship between a scientist and a mouse running through a maze. In this instance, the scientist is the traveler plotting routes through the use of a map. Everything is uncluttered lines, clear pathways, and all-encompassing views. From your lofty position up high, looking down the route and finding your way is easy.

But from the ground, when you're the mouse, you have no such luxury. Everywhere there's walls you can's see over, streets you can't see down, and people bumping and crowding you so you can't stand still and cars and buses and mopeds and bikes whizzing this way and that and everything is moving moving moving. So you run here, you scurry there, you hope when you make this turn St. Paul's will still be there, looming ahead like a great beacon in the sky. 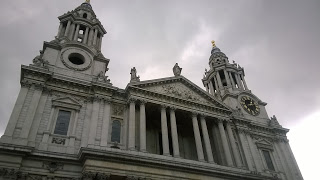 Then you get there, and the cheese is SO CLOSE . . . but where is it? WHERE IS IT!?!?!?
And the whole time the scientist's head is shaking as the thought of "Why is this mouse having such a hard time?" repeats itself over and over again.

Fortunately our class found the cheese (the Museum of London) as we had an experienced mouse (Susie) leading the way.

Once there, we met Sarah Castle, who is in charge of higher education programs at the Museum. It's her job to make sure we don't get lost and have something to do. She gave us a little talk, then let us loose in the Museum for about 40 minutes to find something from 1900 - Present that we would like to bring home with us if we could, with the promise that upon our return there would be eight or so curators there as well who would also share with us their own picks.

I knew right away what I would be looking for: a dress, preferably dating from 1900 - 1915. Luckily I found one fairly quickly: 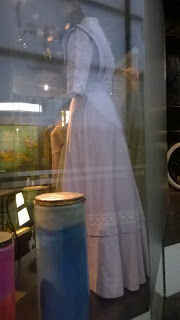 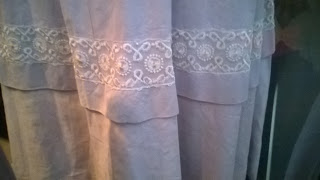 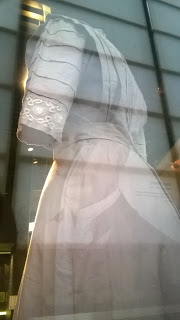 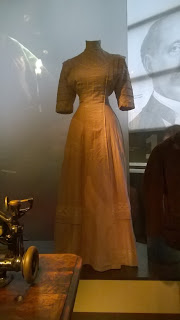 The dress dates from 1910 and was worn by Minnie Long for her wedding. I like wedding dresses in particular because they often come with a known history, unlike a lot of the other clothes held in museum collections. Often the name of the wearer, exact date it was worn, and location worn is available, plus occasion, obviously. The early 1900's are often referred to as the "Last Age of Elegance," and it really is true. This dress is a soft lavender in color (a bit difficult to tell from the frontal photograph I took but hopefully apparent in the others) and it's location in the back of a multi-sided glass case enabled me to examine it much closer than I could the other dresses displayed in the same case. Hence the close-up photographs of the back side of the dress, with its tiny hook-and-eye fastenings, delicate embroidery, and crisp pleats.

Once I found my "To Share" item I made a quick zip through the Museum's two floors, covering pre-Roman London through modern London. I wasn't able to linger too long at any one display but I plan on providing a more thorough run-down of the Museum's layout, displays, strengths and weaknesses in future posts.

After we all shared class was briefly wrapped up and I took a leisurely stroll home, in which the majority of the time I didn't actually know where I was but had enough of a general idea that I didn't mind in the slightest.

I was a very happy mouse.