I had the great pleasure of visiting Cragfont during a War of 1812 event held on the rainy weekend of April 13th through 15th. Although the weather was rather dreary, there was the added bonus of attending as a participant (my family and I fall in with the 2nd Regiment Kentucky Volunteer Militia, or 2nd Kentucky for short).

Located in Castalian Springs, Tennessee, the journey to Cragfont takes drivers up and over rolling hills, twisted turns, and past tidy country houses and dignified rural estates. With such expansive dwellings fresh in the memory while rattling up the gravel sweep before Cragfont, it is difficult to imagine that the stately yet simple (by modern standards) home was once the most elegant residence on the Tennessee frontier. 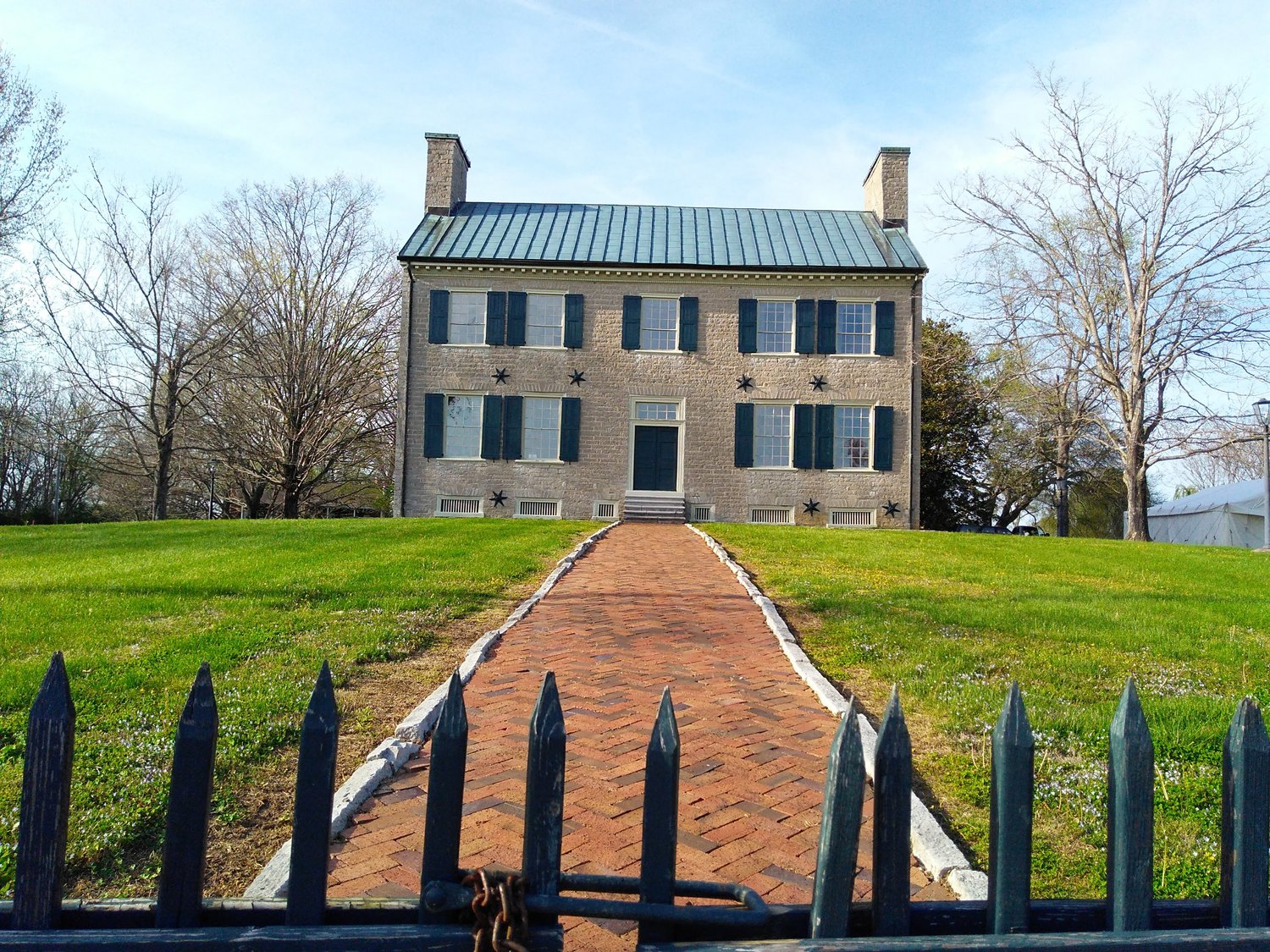 Yet so it was, when General James Winchester (1752-1826) and his wife, Susan Black Winchester (1777-1864), had their home designed and built between 1798 and 1802. James Winchester was born in Maryland to an aristocratic family of English lineage, he was a man of many interests and careers, being a military commander in both the Revolutionary War and the War of 1812, an entrepreneur, pioneer, and in 1820 co-founded the city of Memphis. 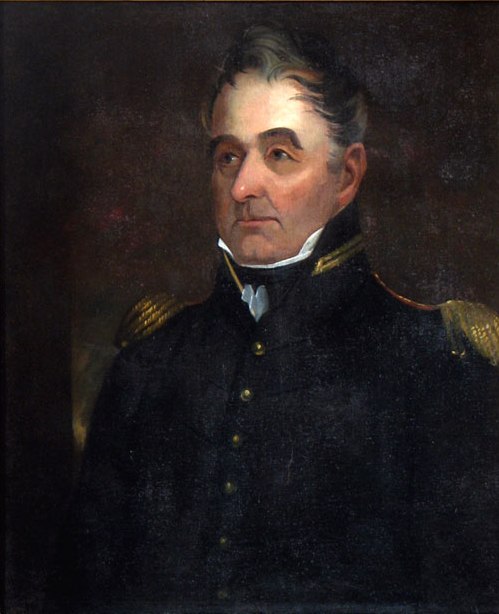 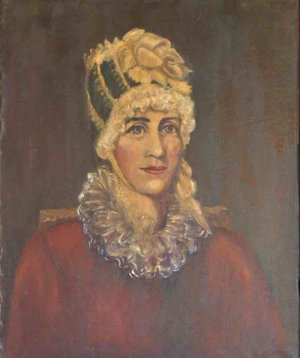 After being discharged from military service for the Revolution, in 1785 both James and his brother George moved west, to the Cumberland settlements of Middle Tennessee. He named the mansion he had built out of the Tennessee frontier "Cragfont," as it is located on a high, rocky bluff (crag) with a spring (font) located at the base. Architecturally of the late Georgian period, Cragfont's exterior was made from grey, rough-hewn limestone quarried nearby; likewise, the poplar, walnut, cherry, and ash used in the interior was taken from the surrounding forests. The house itself is T-shaped, with the top of the T to the front, and the stem extending out towards the rear. 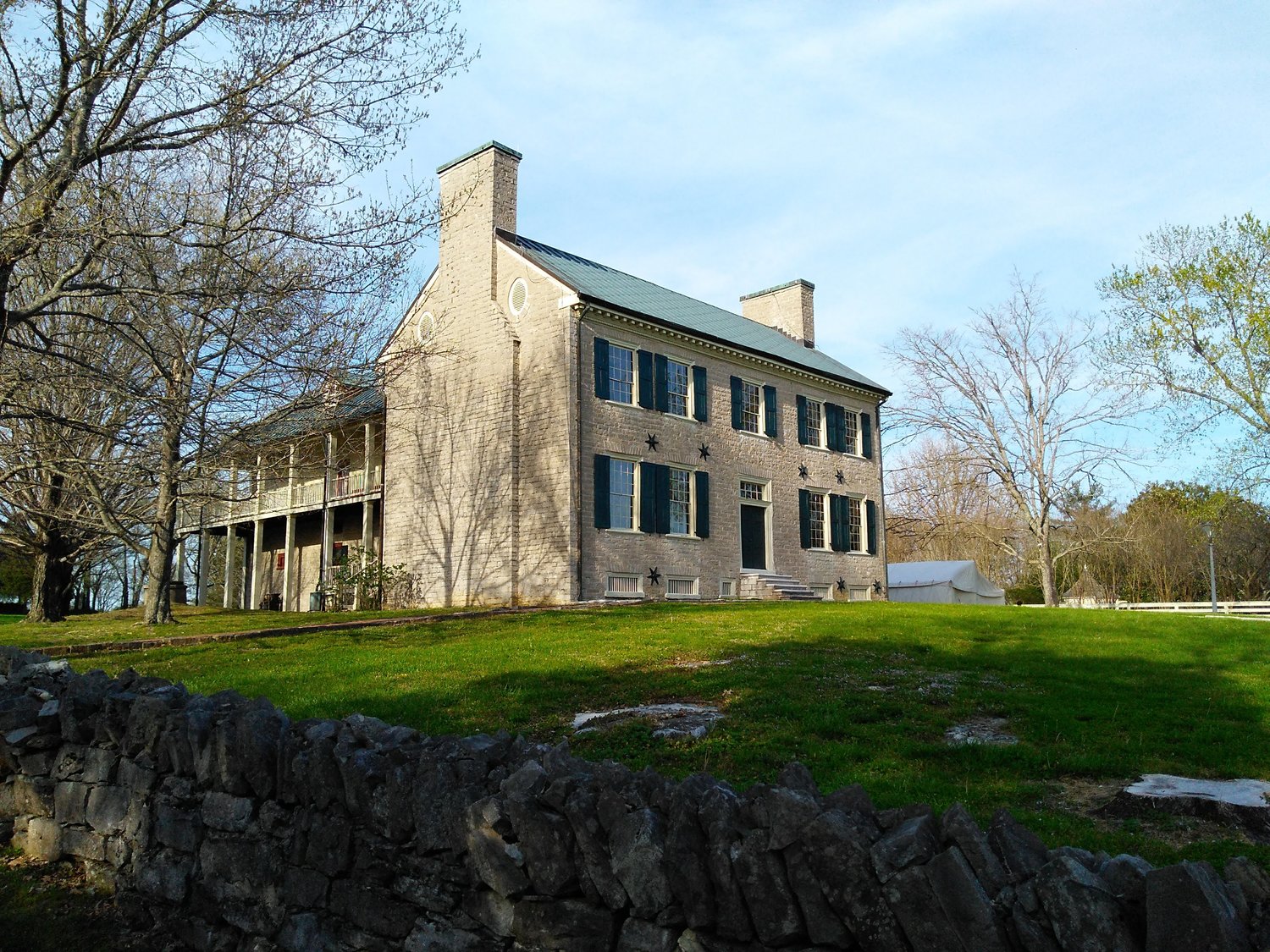 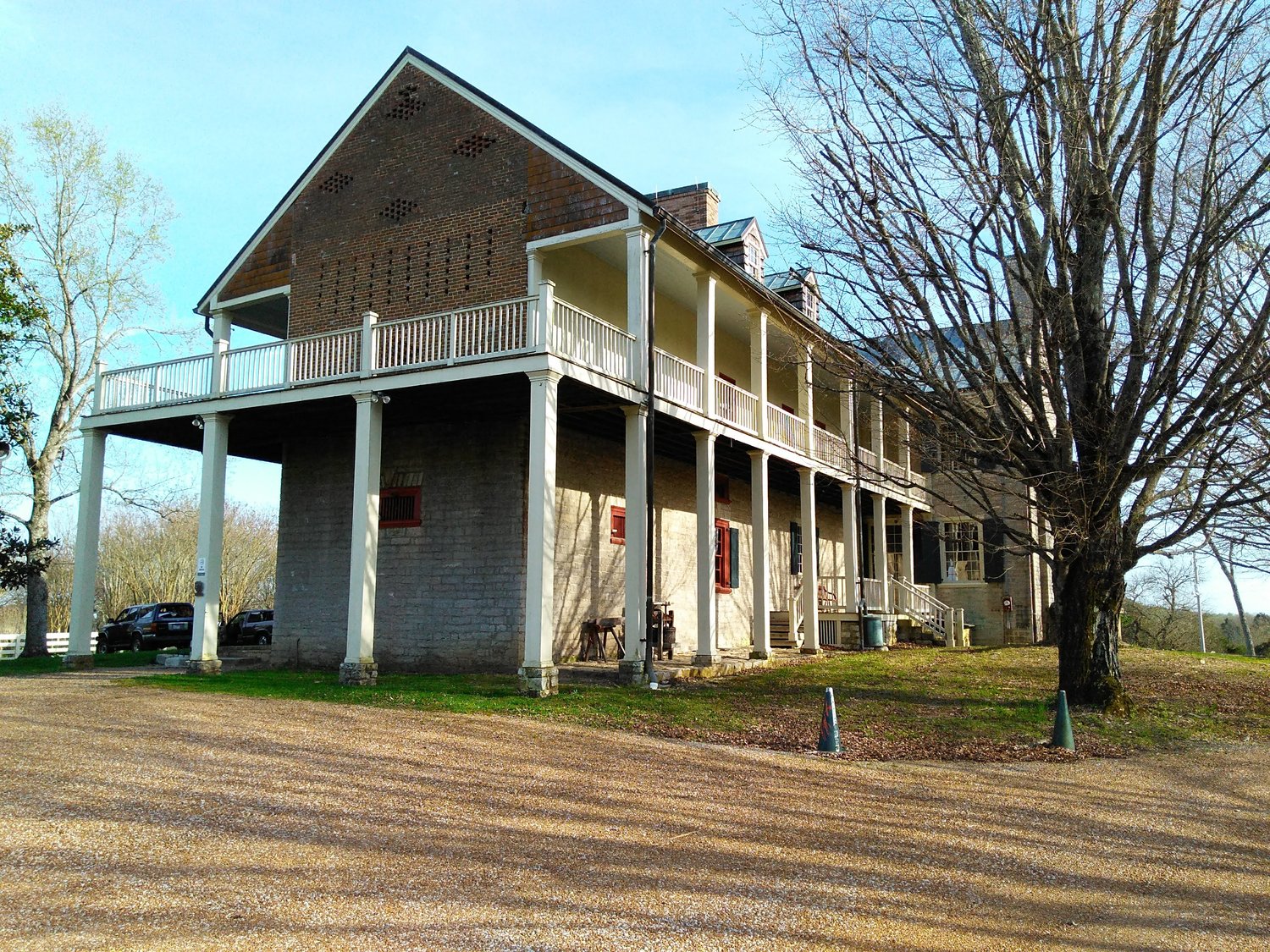 Entering through the front door one finds oneself in the entrance hall, a flight of stairs leading to the second floor. The parlor, dining room, office, and library are all on the first floor, as is the kitchen and a smokehouse, which was unusual for the time period. 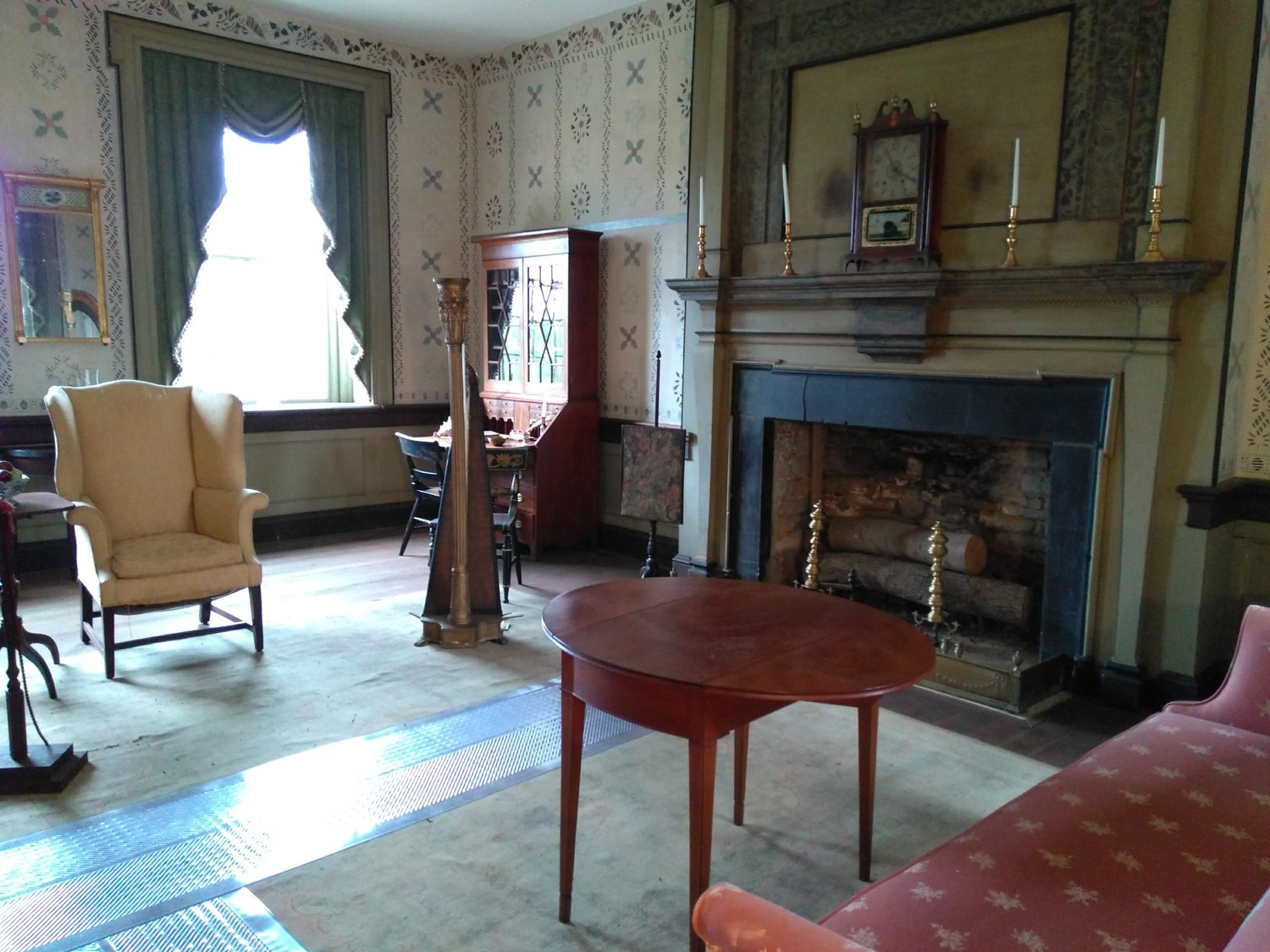 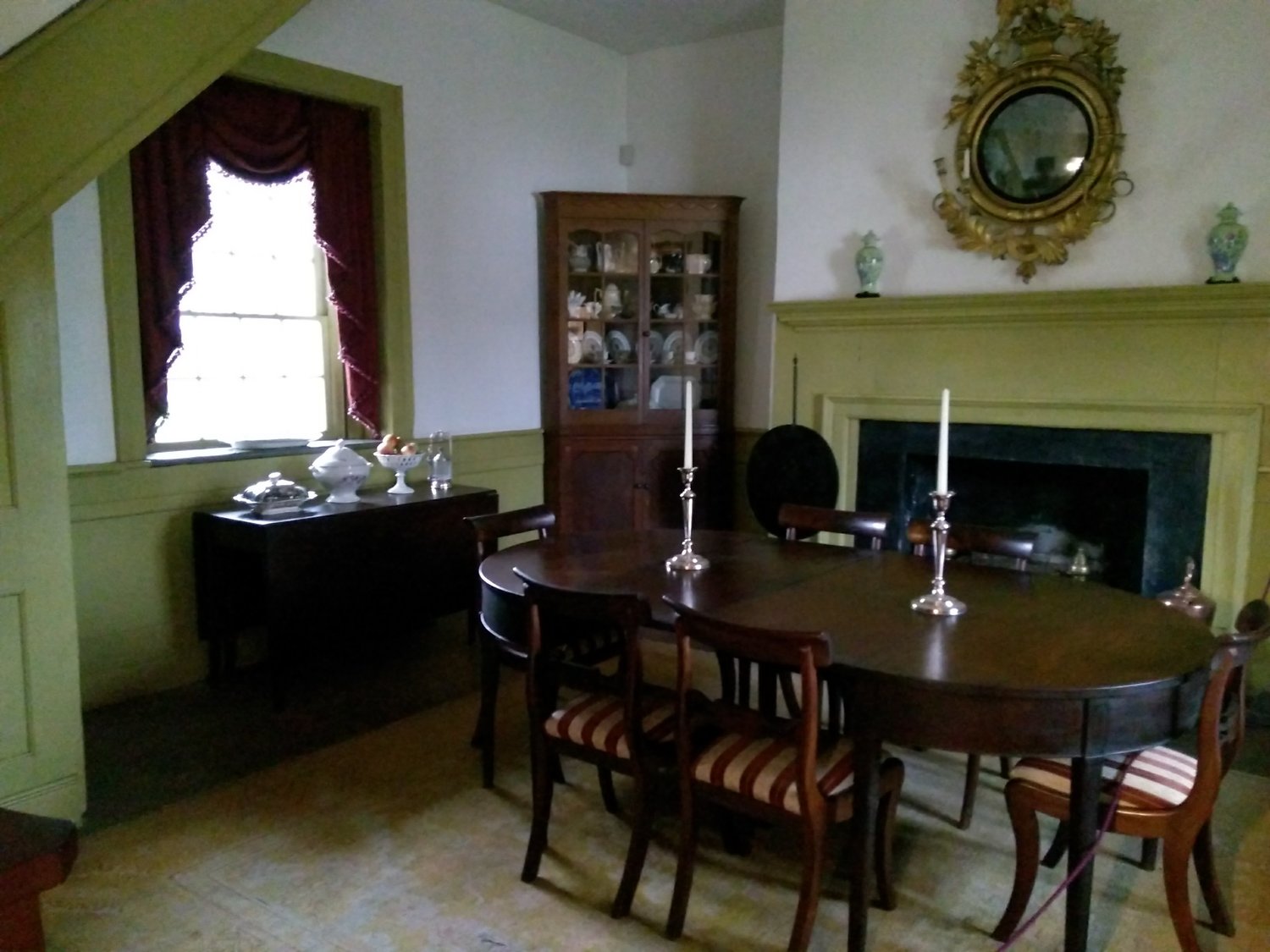 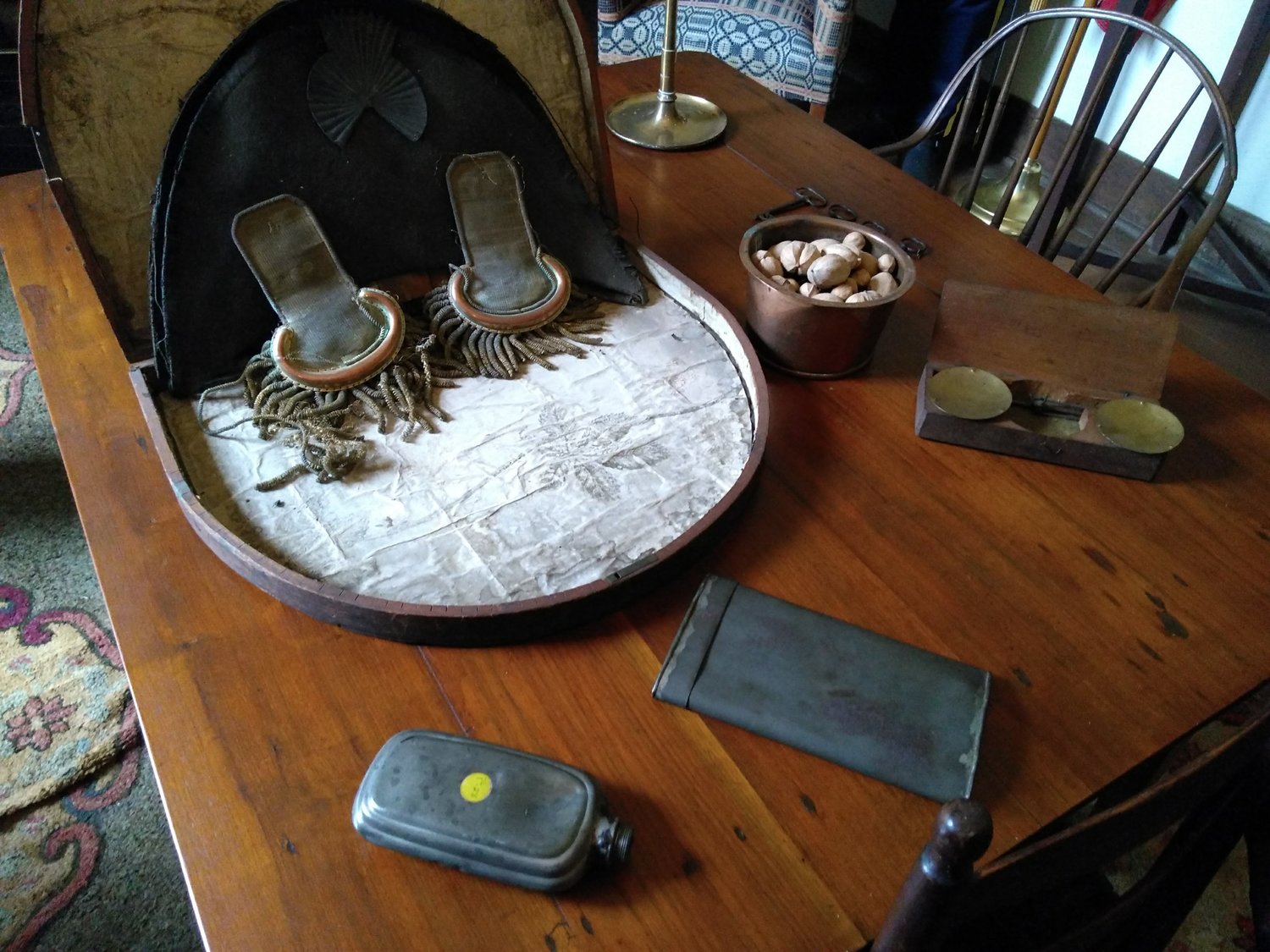 Upstairs in the top of the "T" are a landing hall providing access to three bedrooms, which are original to the house. The two-story rear ell was added later, between 1805 and 1825, consisting of a ballroom and second dining room/parlor, above both is an attic space. 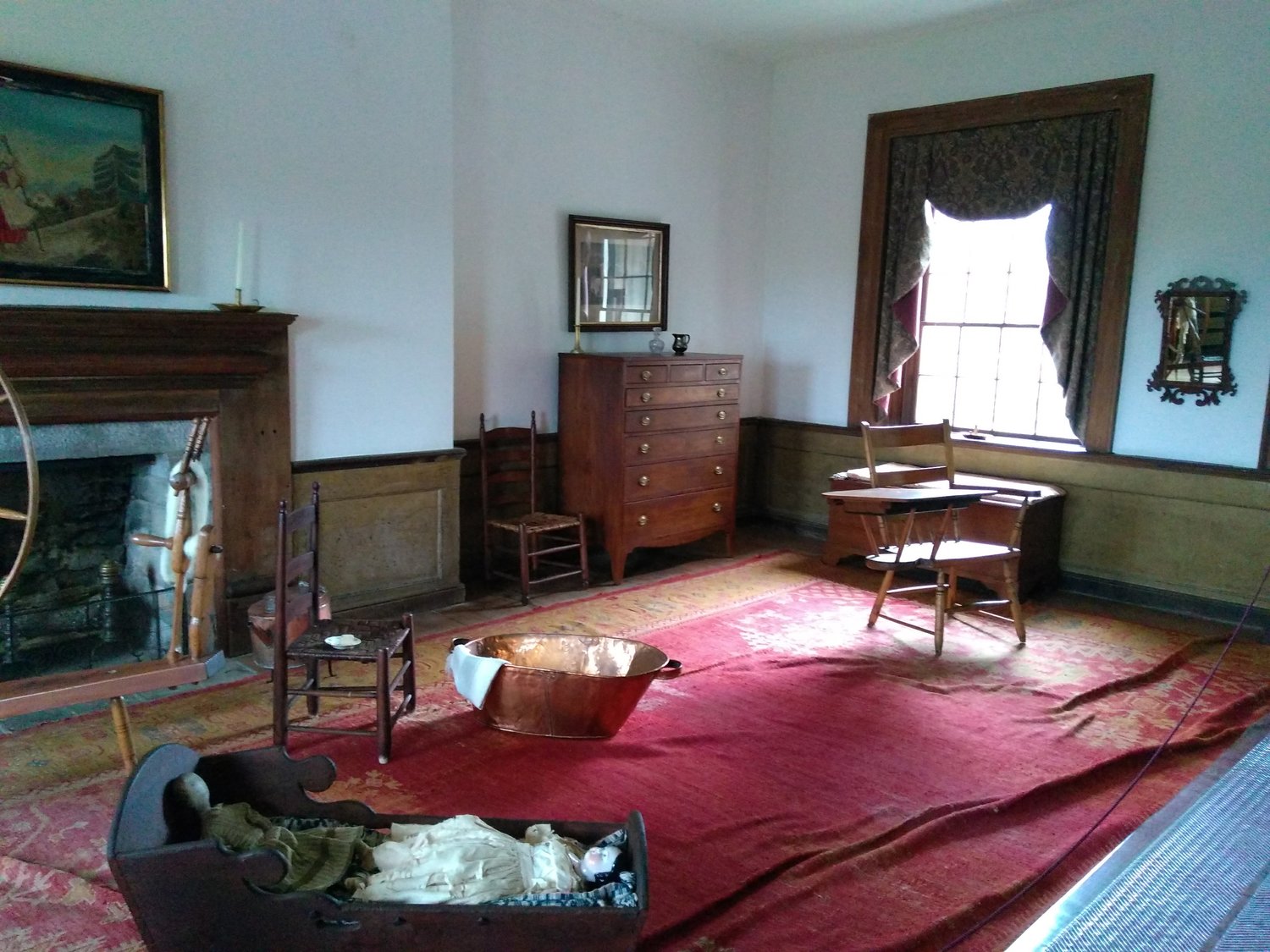 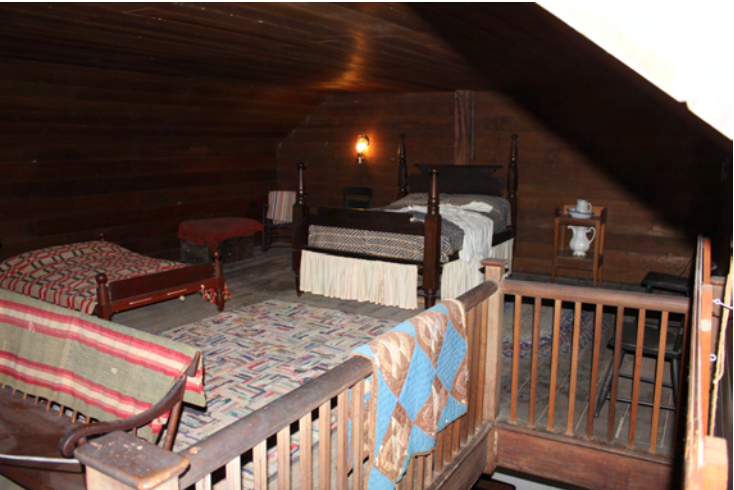 The current look of the attic as bedrooms was created during the 1959-1961 renovation and does not reflect the original look or function of the space. This is most fortunate, because it would be very, very hot up in those rooms, something quite apparent during a drizzly mid-April afternoon and certainly a factor come those muggy August evenings. The windows do offer a lovely view of the gardens, however, though I doubt that would offer much relief from the heat. 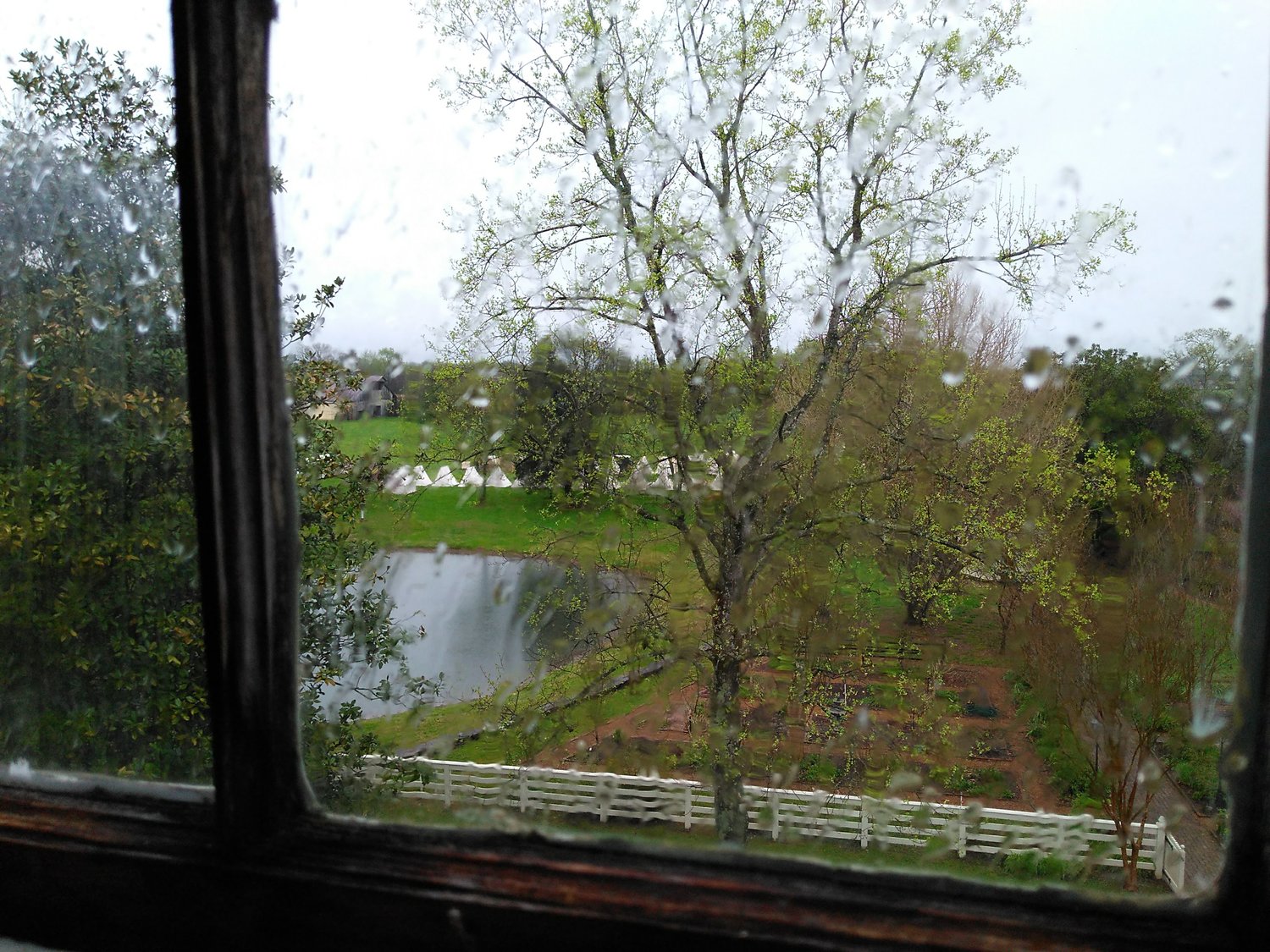 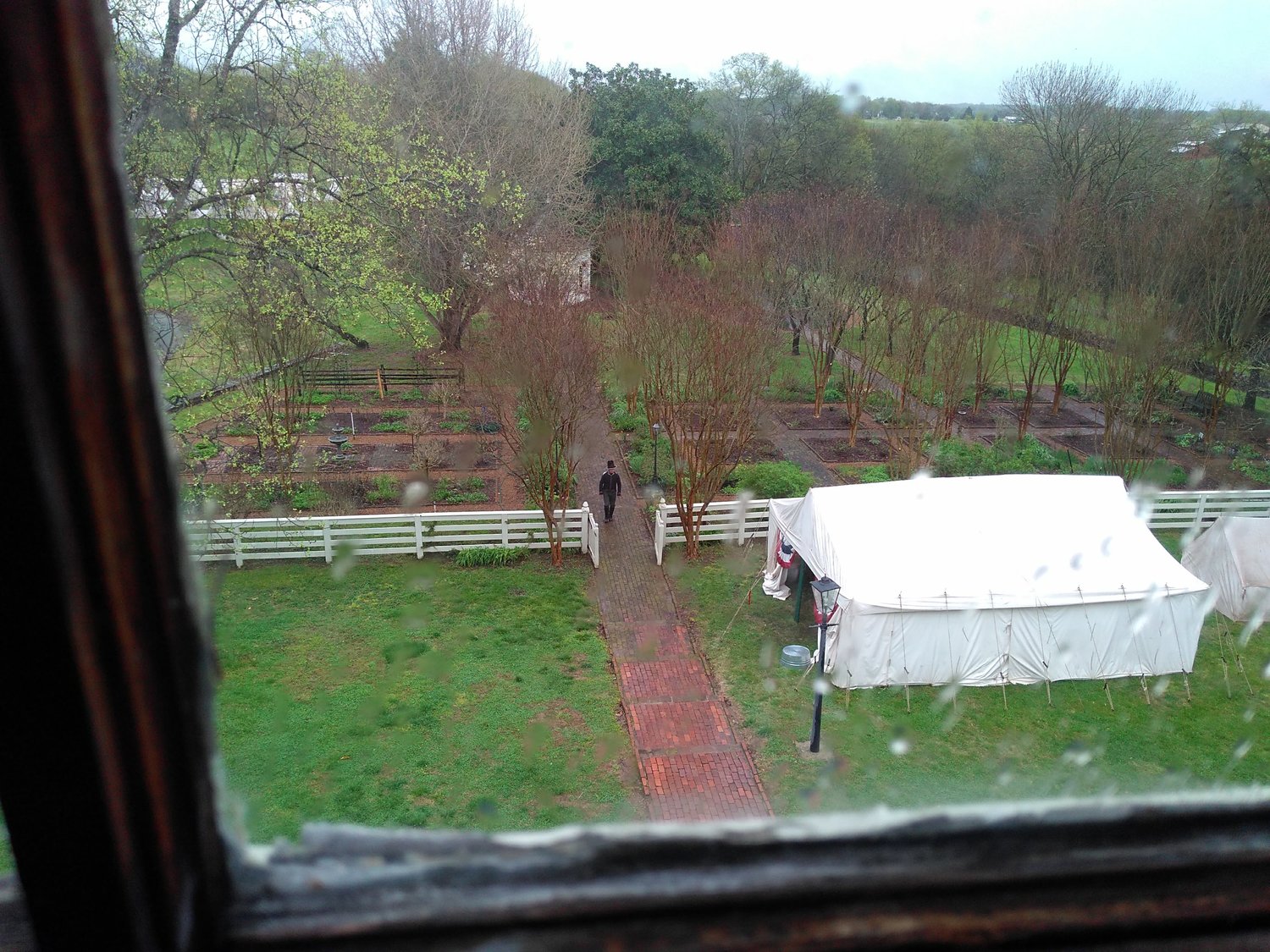 Like most of the grounds, the current garden is not the original, though an effort was made during the early 1970s reconstruction of the gardens, pond, and summer house. Duncan Callicott, a landscape architect at the Tennessee Botanical Gardens and Fine Arts Center at Cheekwood, oversaw the endeavor. His aerial photograph of the site showed a depression along the eastern side of the property, which he thought could be a wall that was part of the original pond. 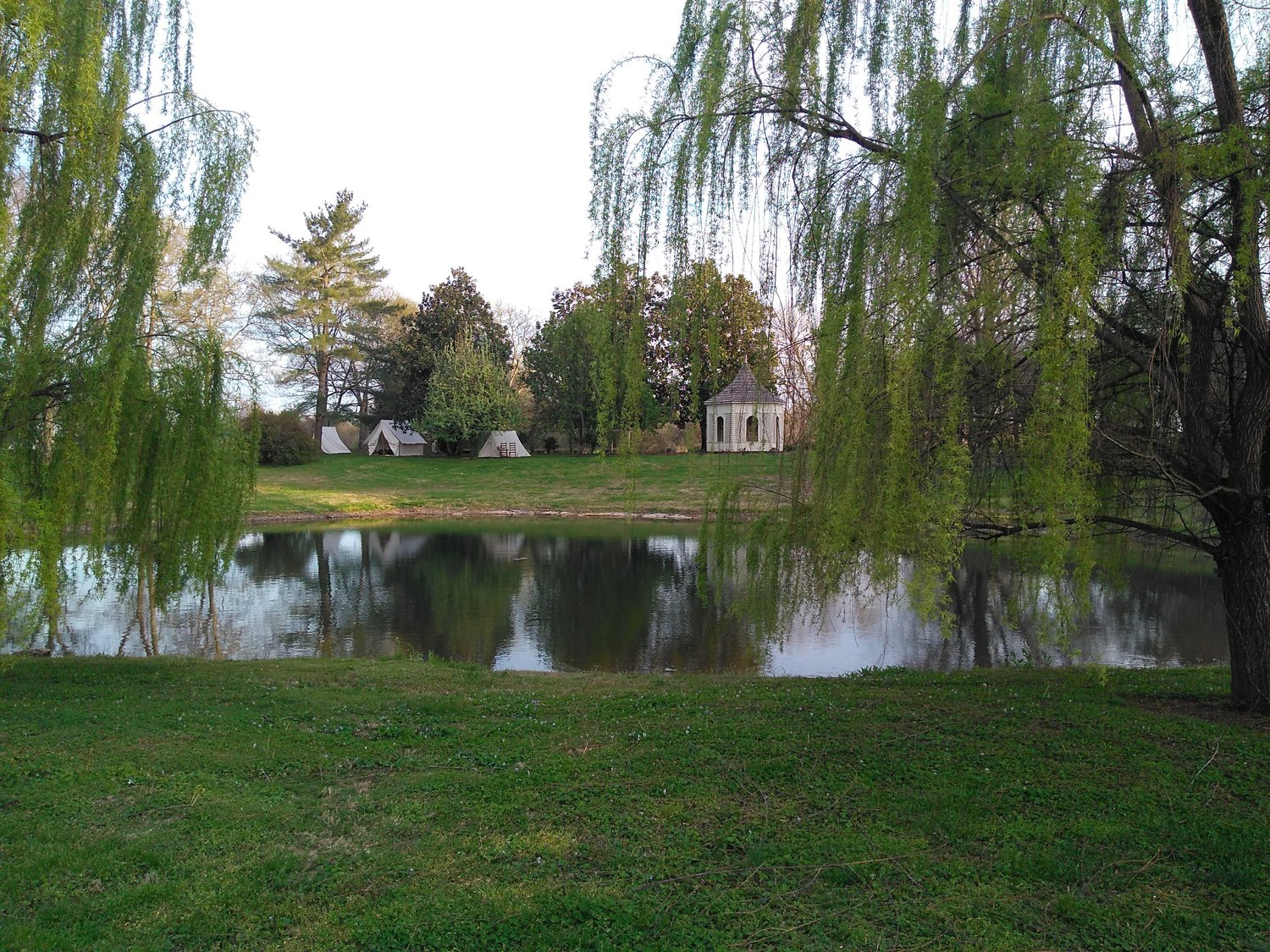 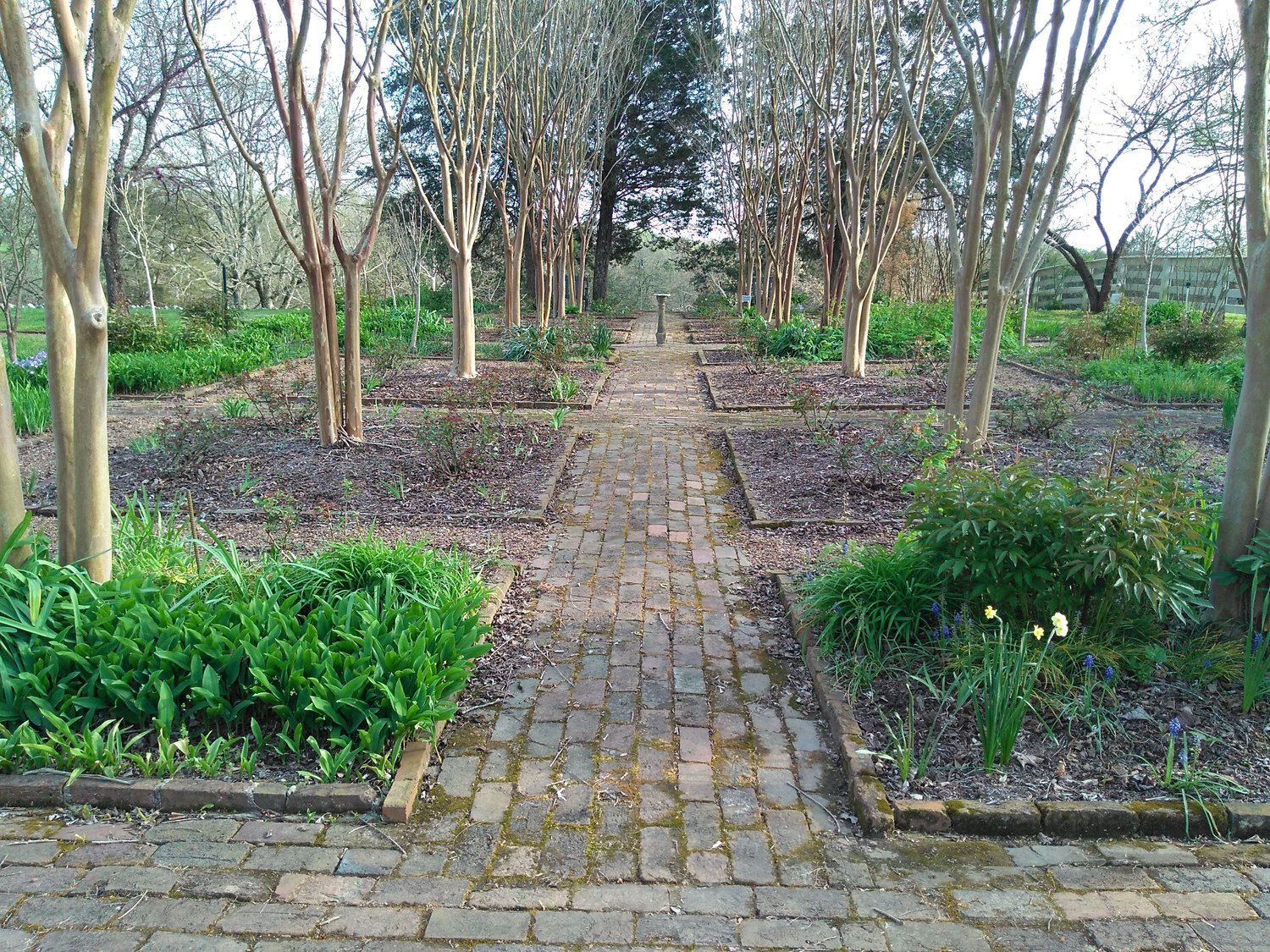 This archaeology report, plus James Winchester's granddaughter Susan Winchester Powell Scales' (1852-1954) remembrances, were the foundation for the finished recreation of the garden, dedicated in 1975 – the pond came later, in 1977. Although the end result is pretty, the slim amount of evidence used in the reconstruction process means the gardens we see today might not accurately reflect those originally lived in by the Winchester family. 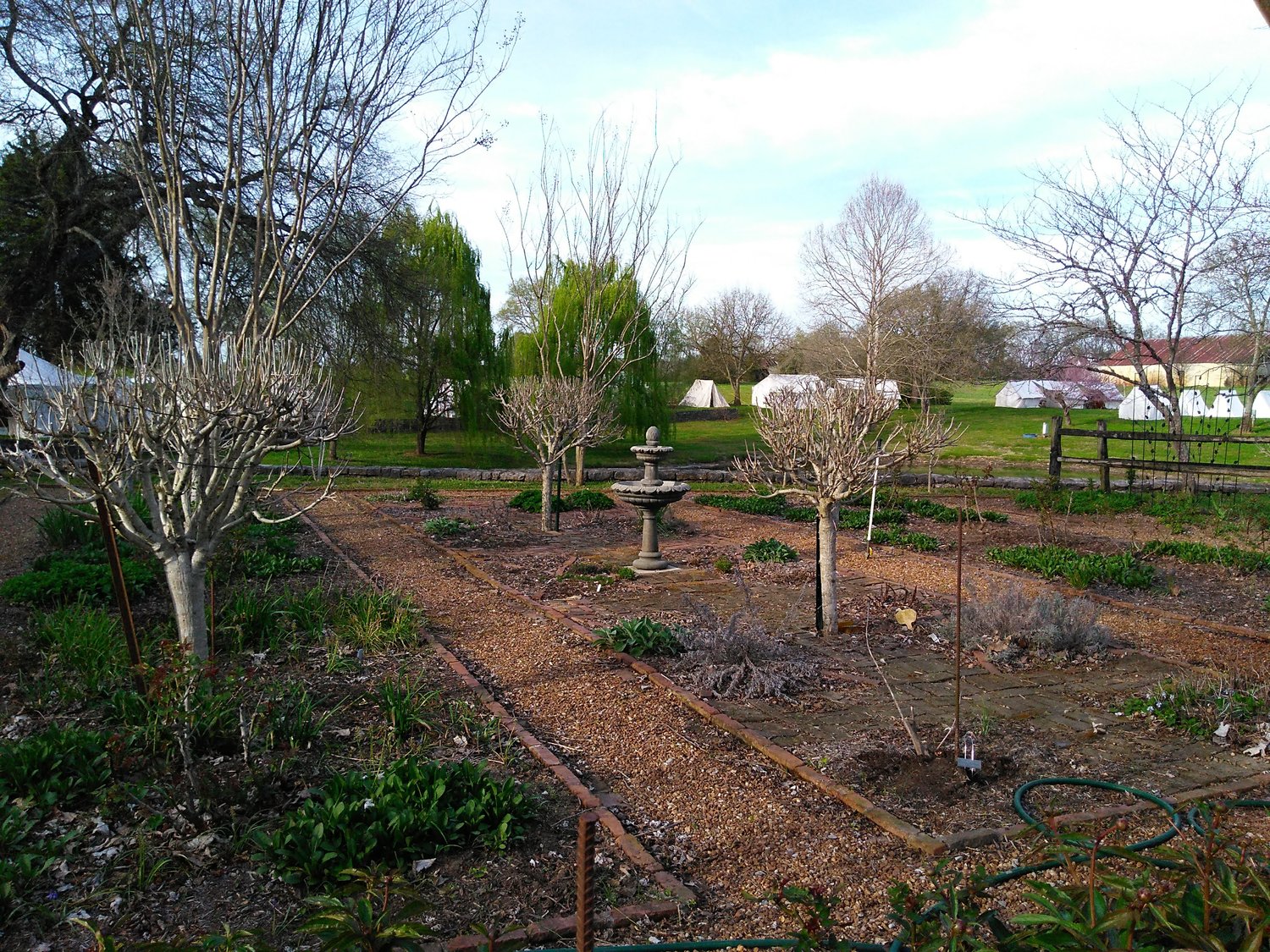 While the garden and the pond attempted to recreate what was originally on site, Cragfont has no remaining outbuildings dating to the Winchester's era. In its heyday, the estate would have had slave quarters, shops, stables, barns, a carriage house, and a spring house. Today, the grounds host a mismash of outbuildings whose means of arrival vary. These include a smokehouse (ca. 1950) used by the McMurty family, who owned Cragfont from 1931-58, a large barn (ca. 1900), a tobacco barn (ca. 1960),the public restrooms (ca. 1980), the office and interpretive center (1991), and the caretaker's house (1979); located near the caretaker's house is the family cemetery. 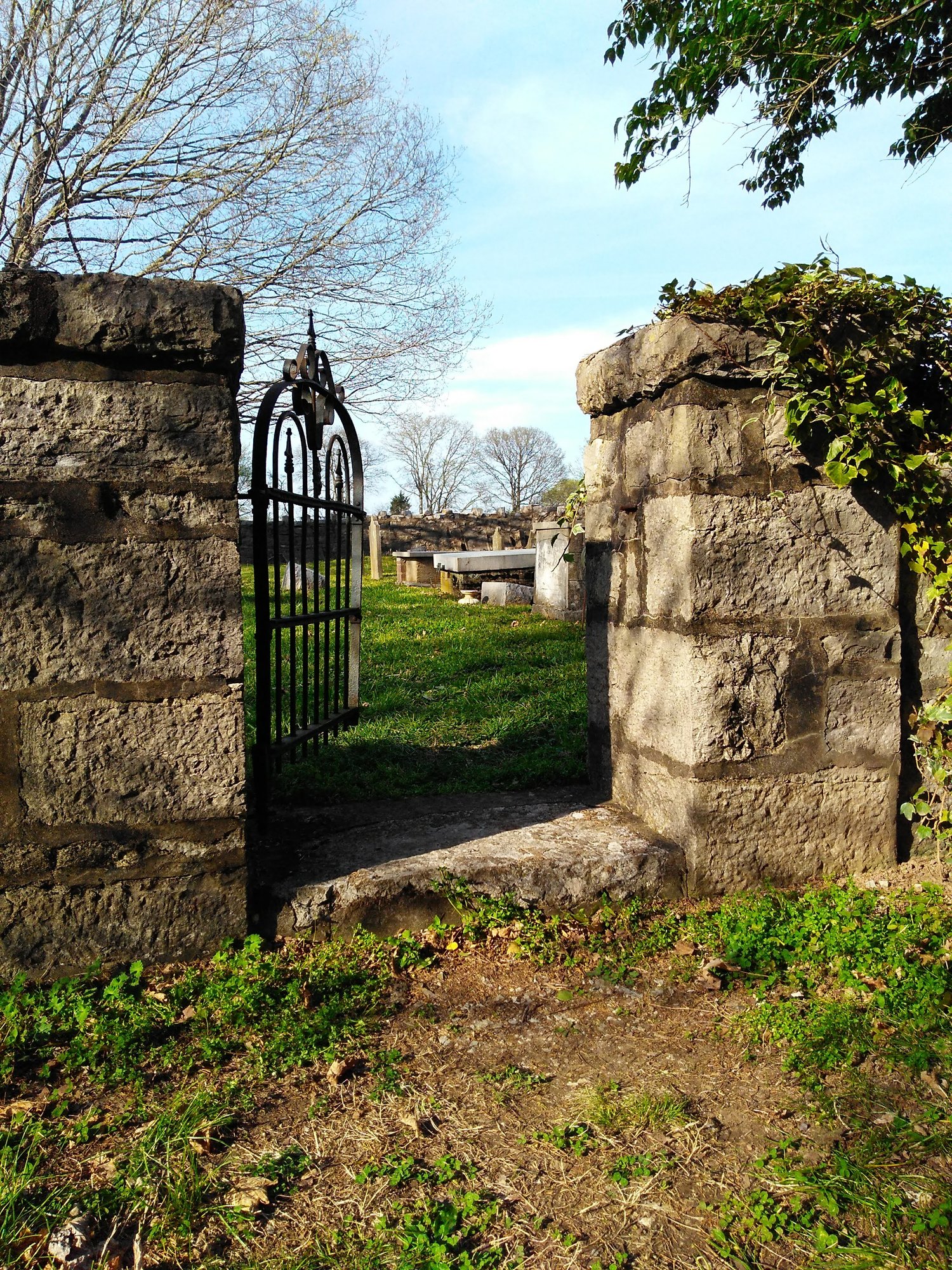 Interpretation, as it turns out, was key to my experience at Cragfont. In addition to dressing for the part, the Ladies of 1812 had the unique opportunity to take tea in the mansion's parlor. We sipped tea out of delicate teacups (each brought her own), nibbled on period-appropriate finger foods (pot-luck style, made with love and plenty to share), and chatted like ladies do, both now and two hundred years ago. 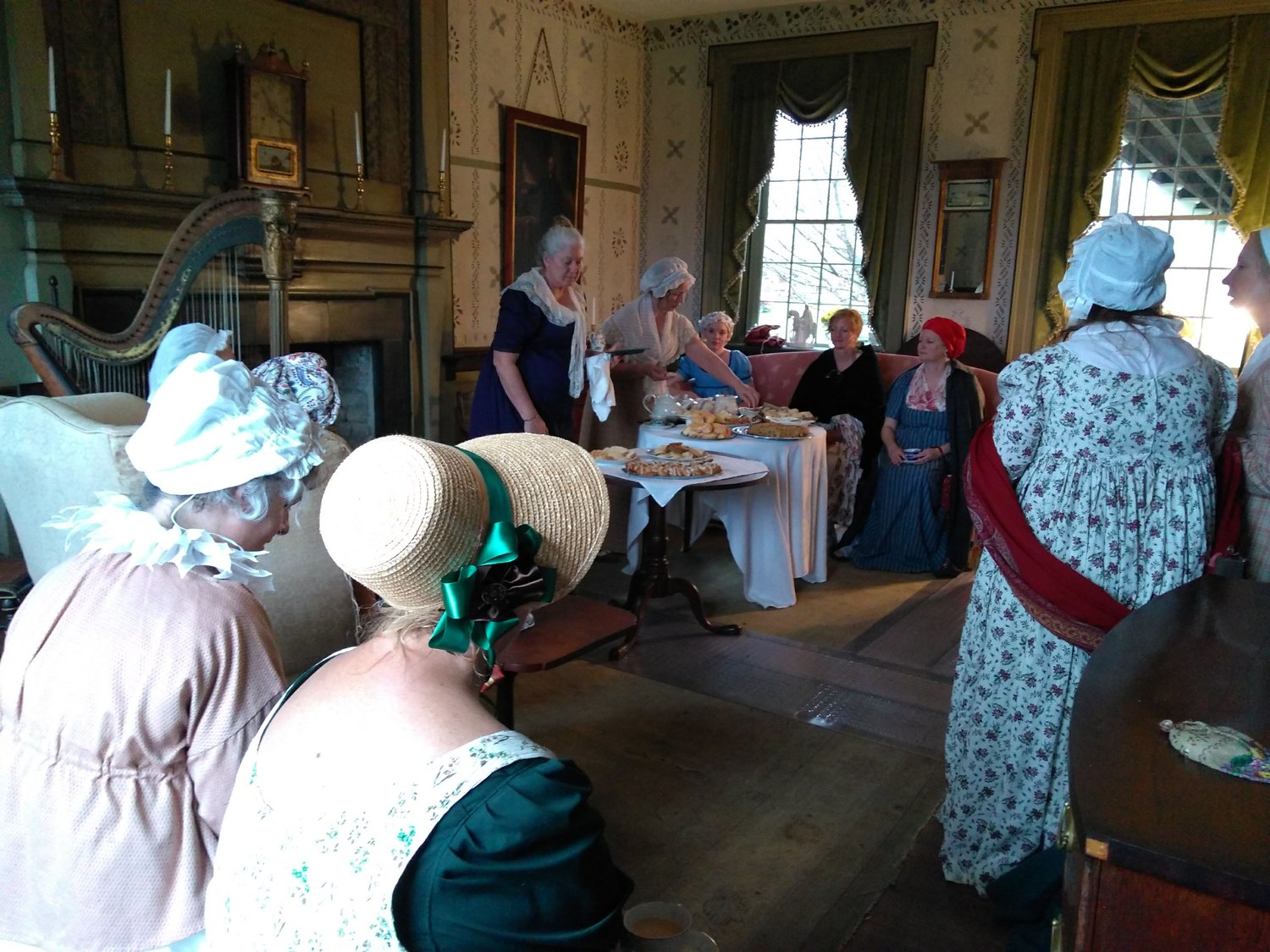 While milling about in the parlor, which is usually roped off, I spotted the signed and dated names of some of the residents of Cragfont. 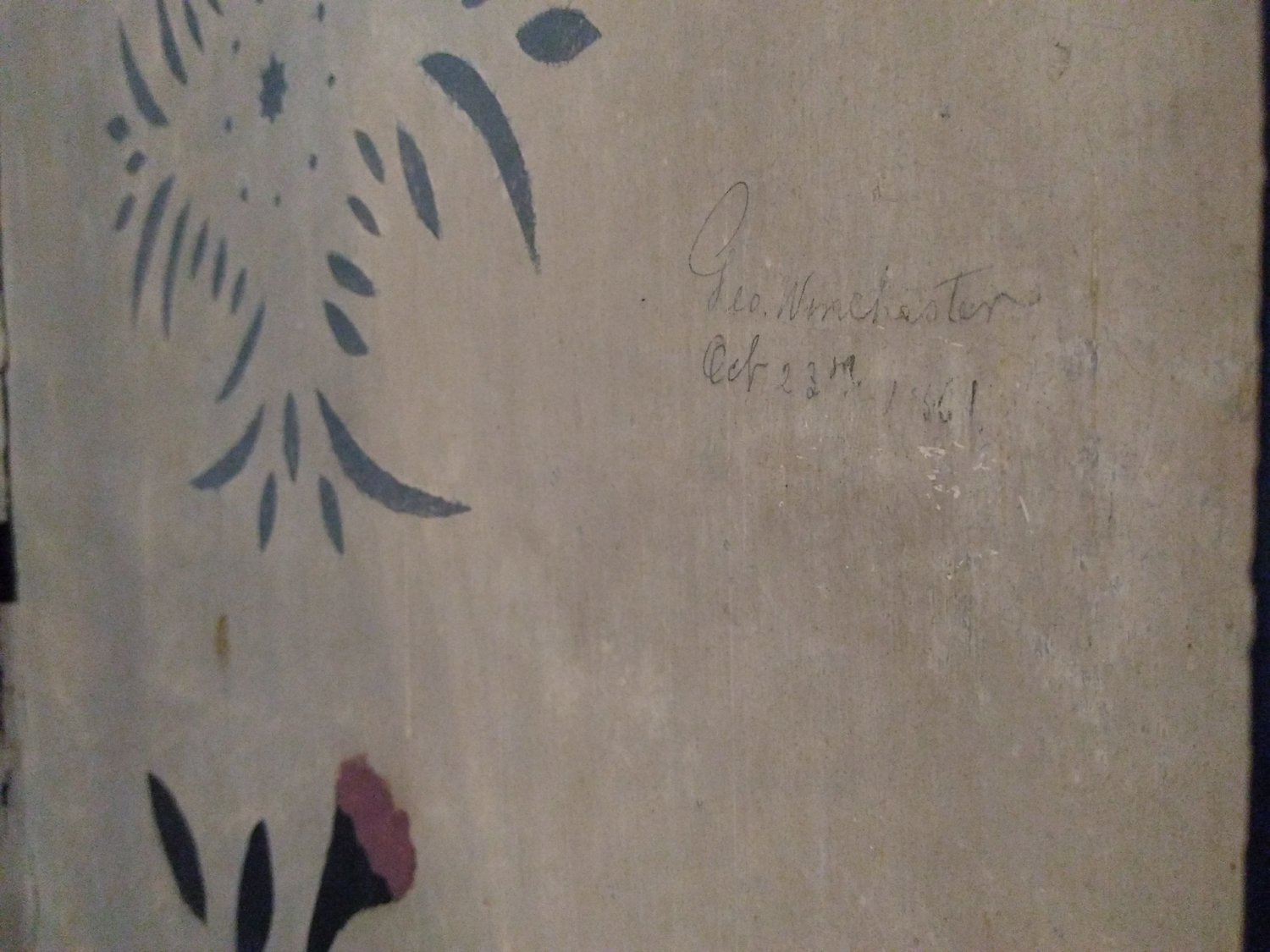 Additionally, ladies and gentlemen alike took part in a ball held in the mansion's ballroom. Dancing period dances as live music played felt almost like the real thing, or at the very least one of the Regency movies I love, though I will admit it's a little difficult to be fully immersed in the moment with people pulling out their cell phones and iPads every few minutes! In any event, it was quite the treat to dance in the oldest ballroom in Tennessee. 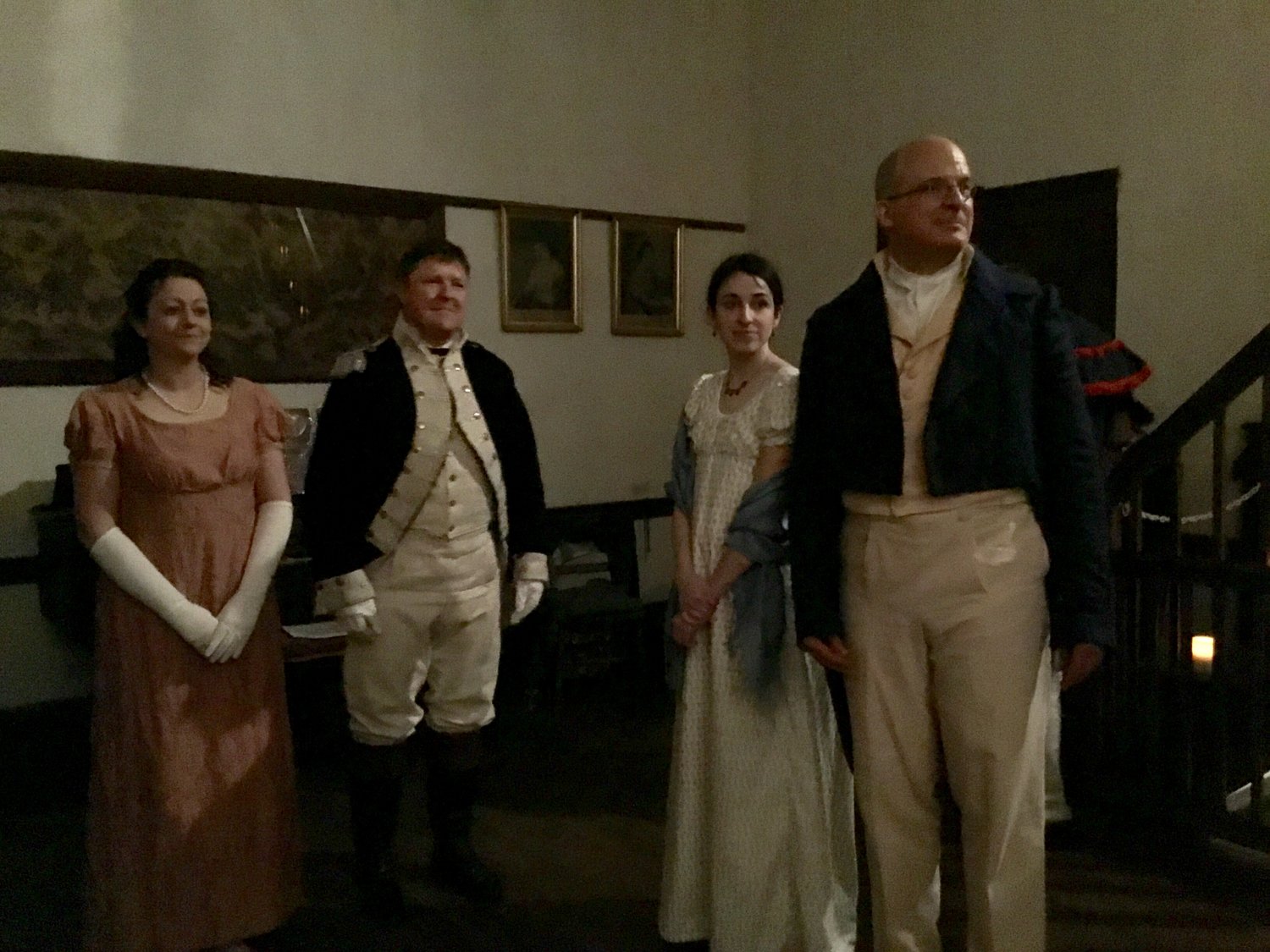 The presence of so many costumed interpreters gave ample opportunity for some very nice images of Cragfont as it might have looked two hundred years ago; the diary of Gen. Winchester's daughter, Almira Winchester (1806-1884) talks of Cragfont as a hub of guests and visitors, where even those previously unknown to the family were warmly welcomed and invited to spend the night. 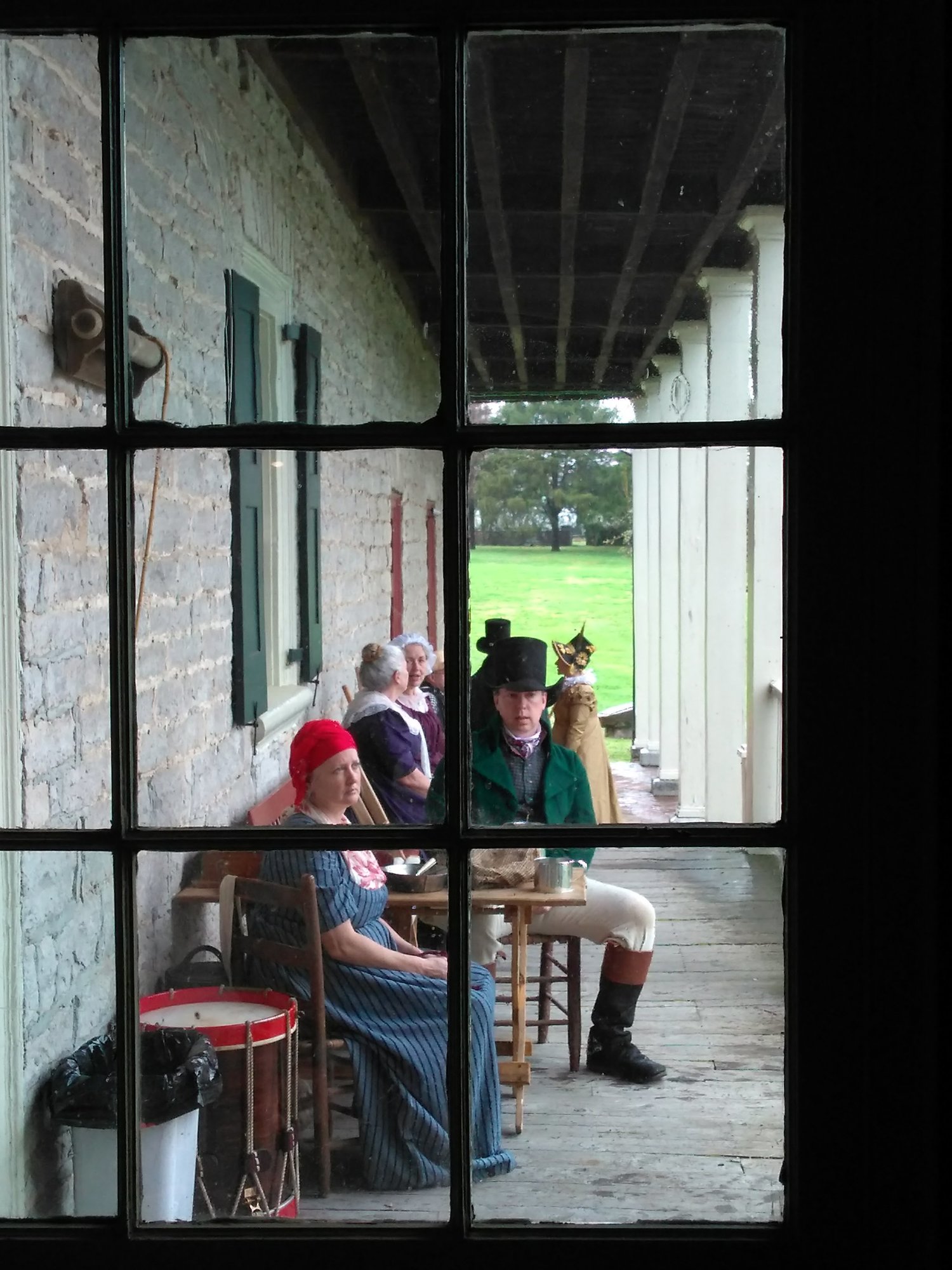 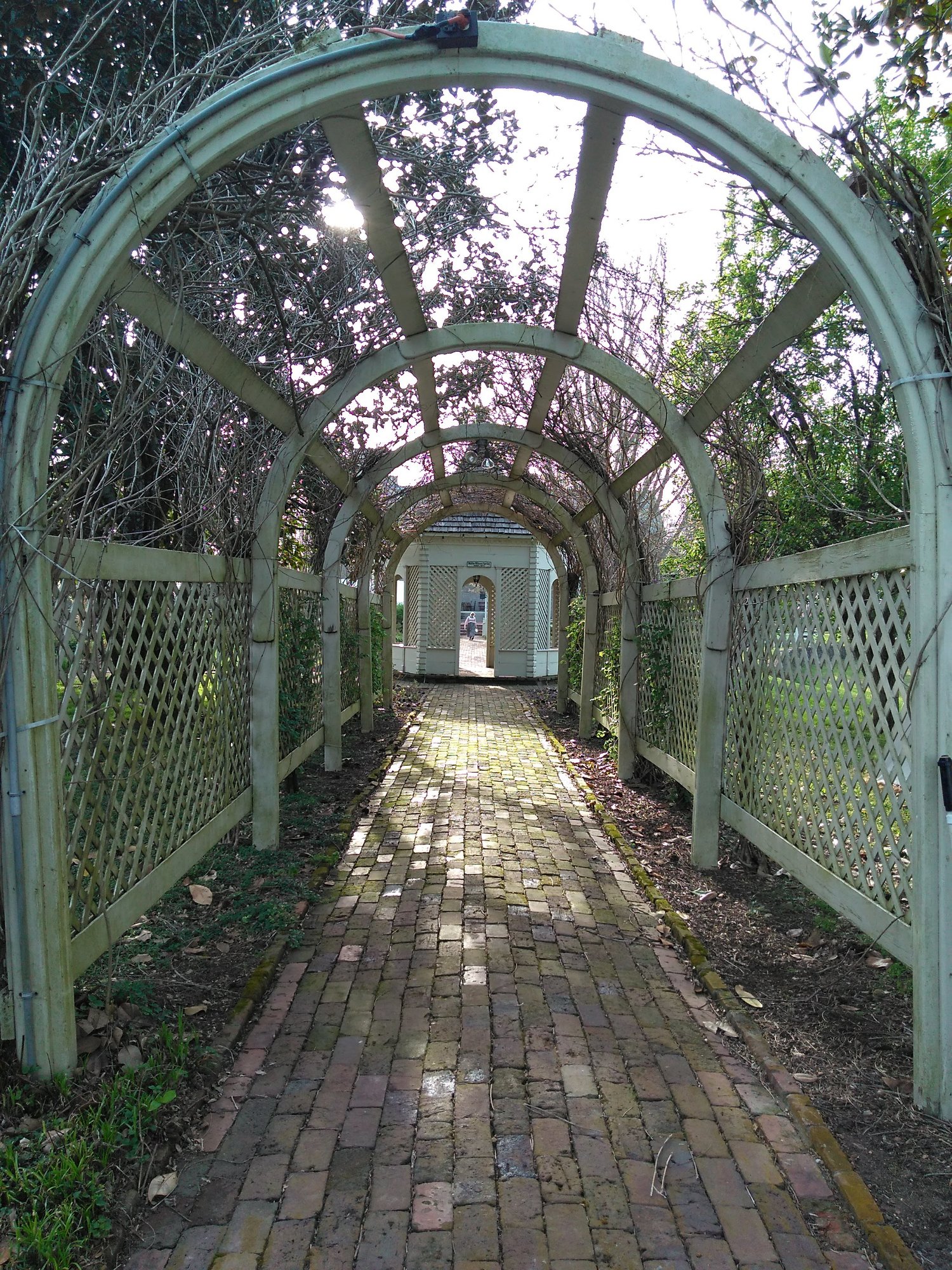 While the tidy rows of tents probably didn't make an appearance in the early years at Cragfont, they certainly would't have been out of place for a military man like Gen. Winchester. 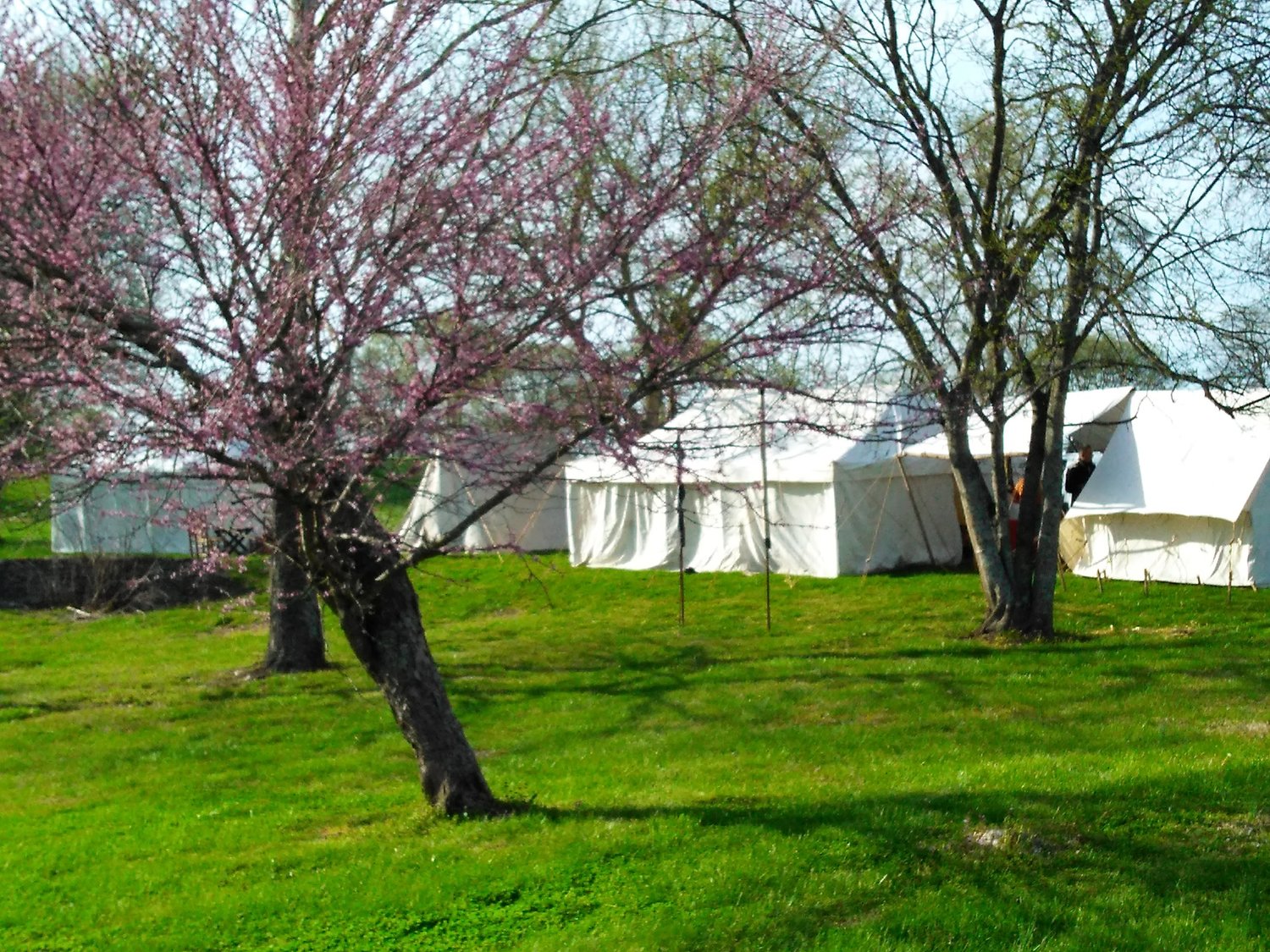 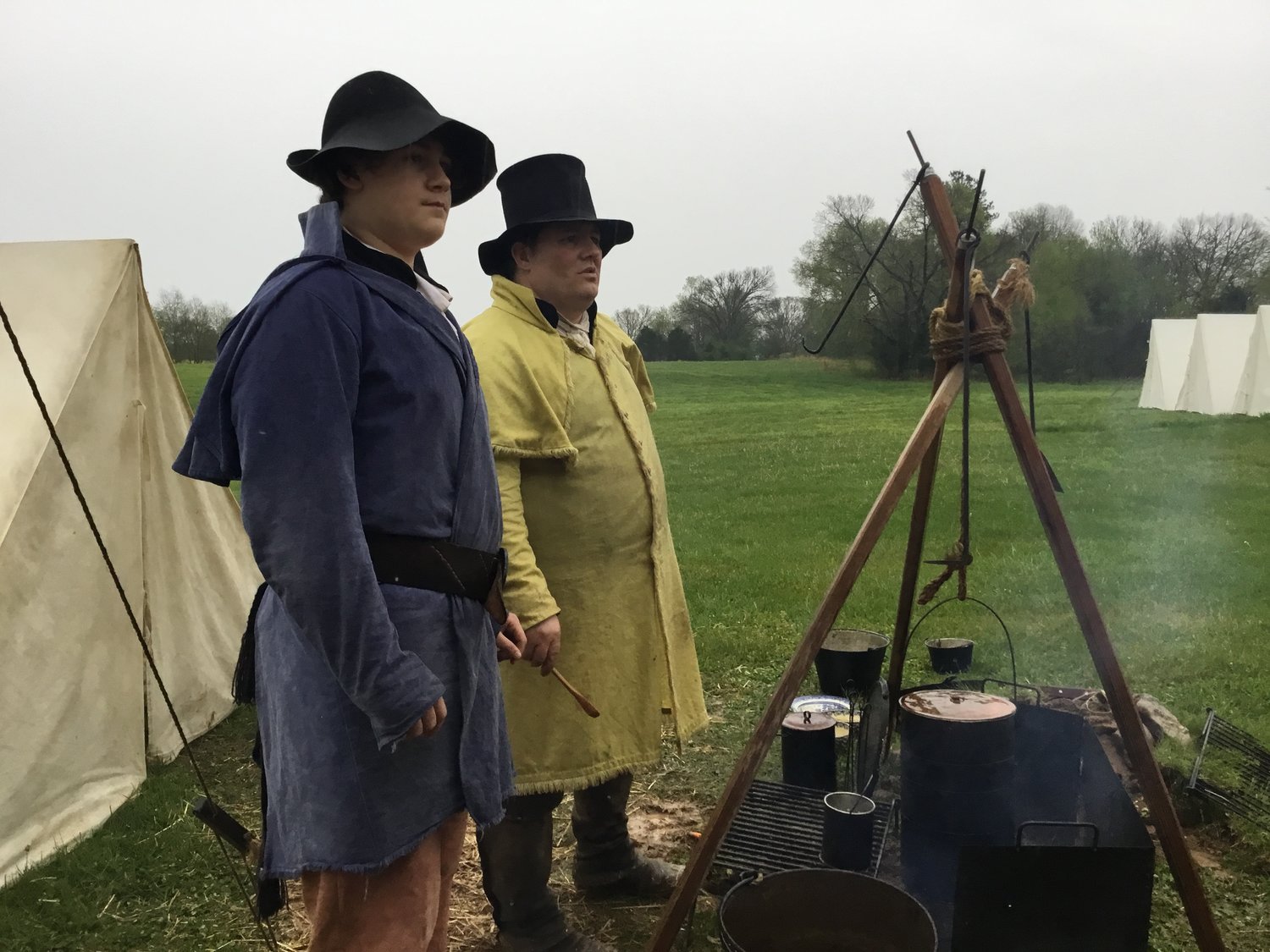 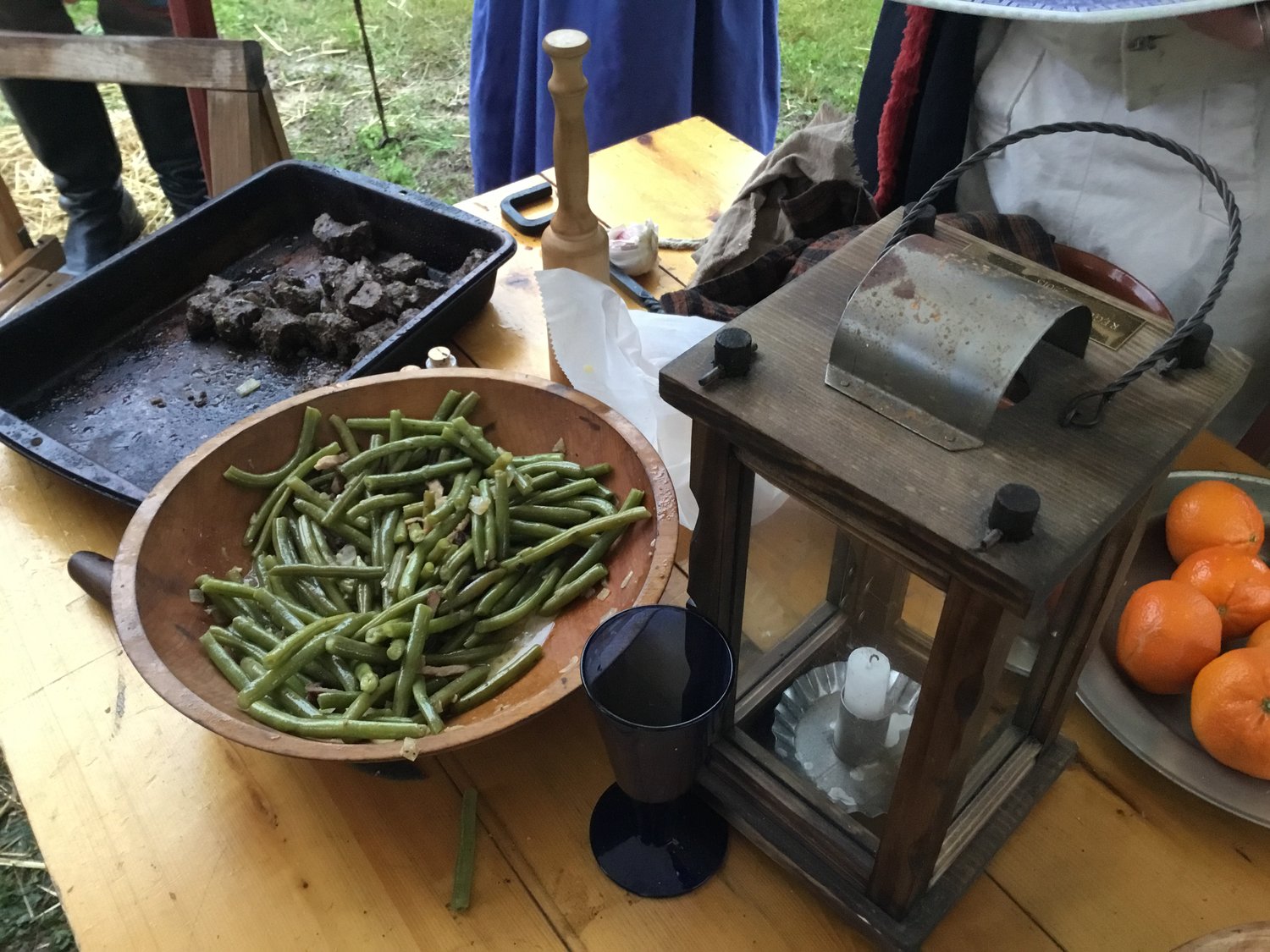 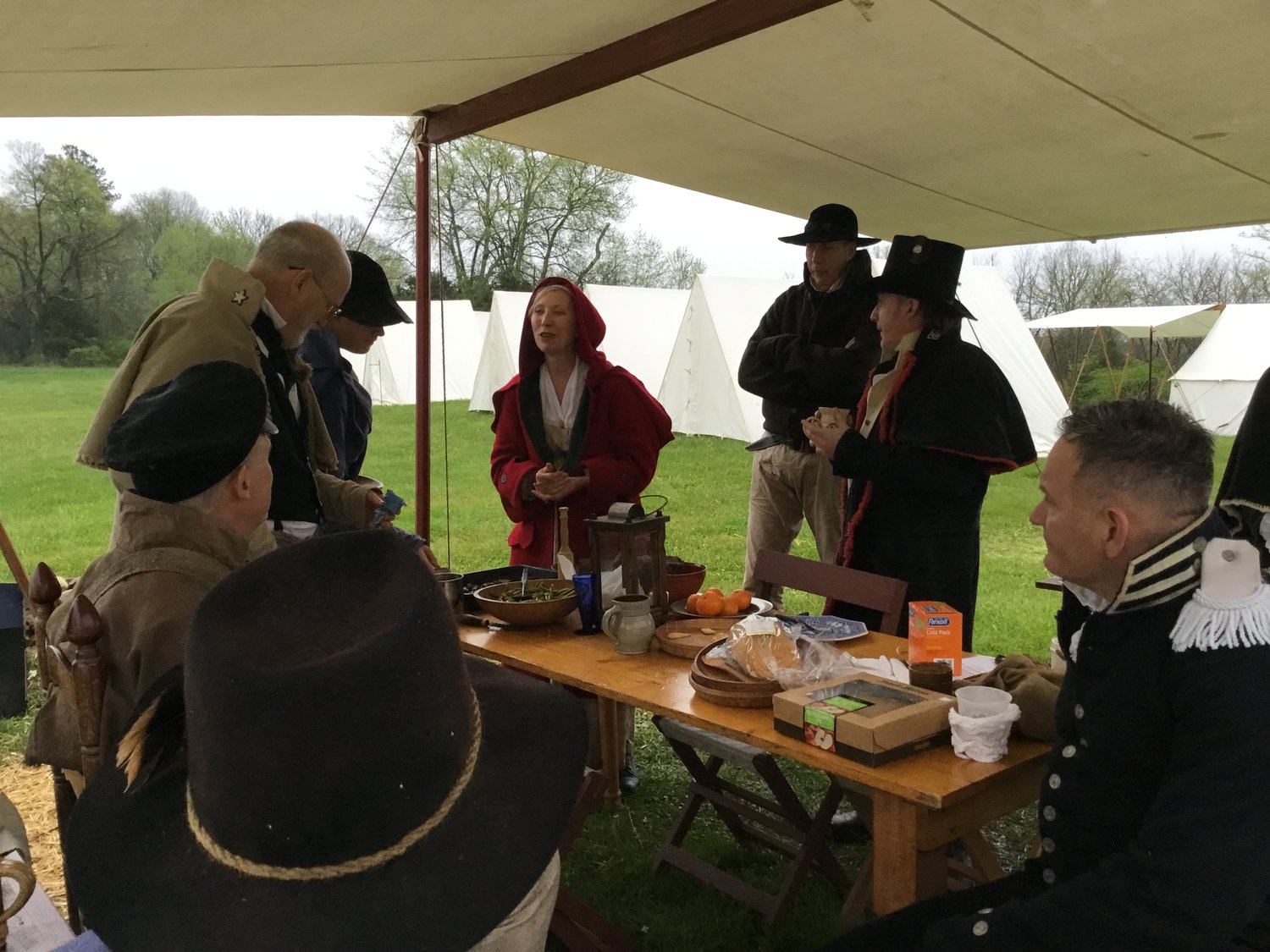 Overall, Cragfont is an excellent site to visit, nestled atop a hillside surrounded by trees and a charming bucolic quiet. The gardens are lovely, and the house an interesting place to walk through, especially as the guides are more than happy to relate amusing anecdotes and engaging facts about the home and its first family.

Visitors making the journey to Cragfont today can expect to find just as warm a welcome as visitors did two hundred years ago. As to whether or not wearing an accompanying historic outfit makes for a more rewarding experience I don't pretend to say, though it certainly doesn't hurt.

From the Tennessee Encyclopedia- https://tennesseeencyclopedia.net/entries/cragfont/ 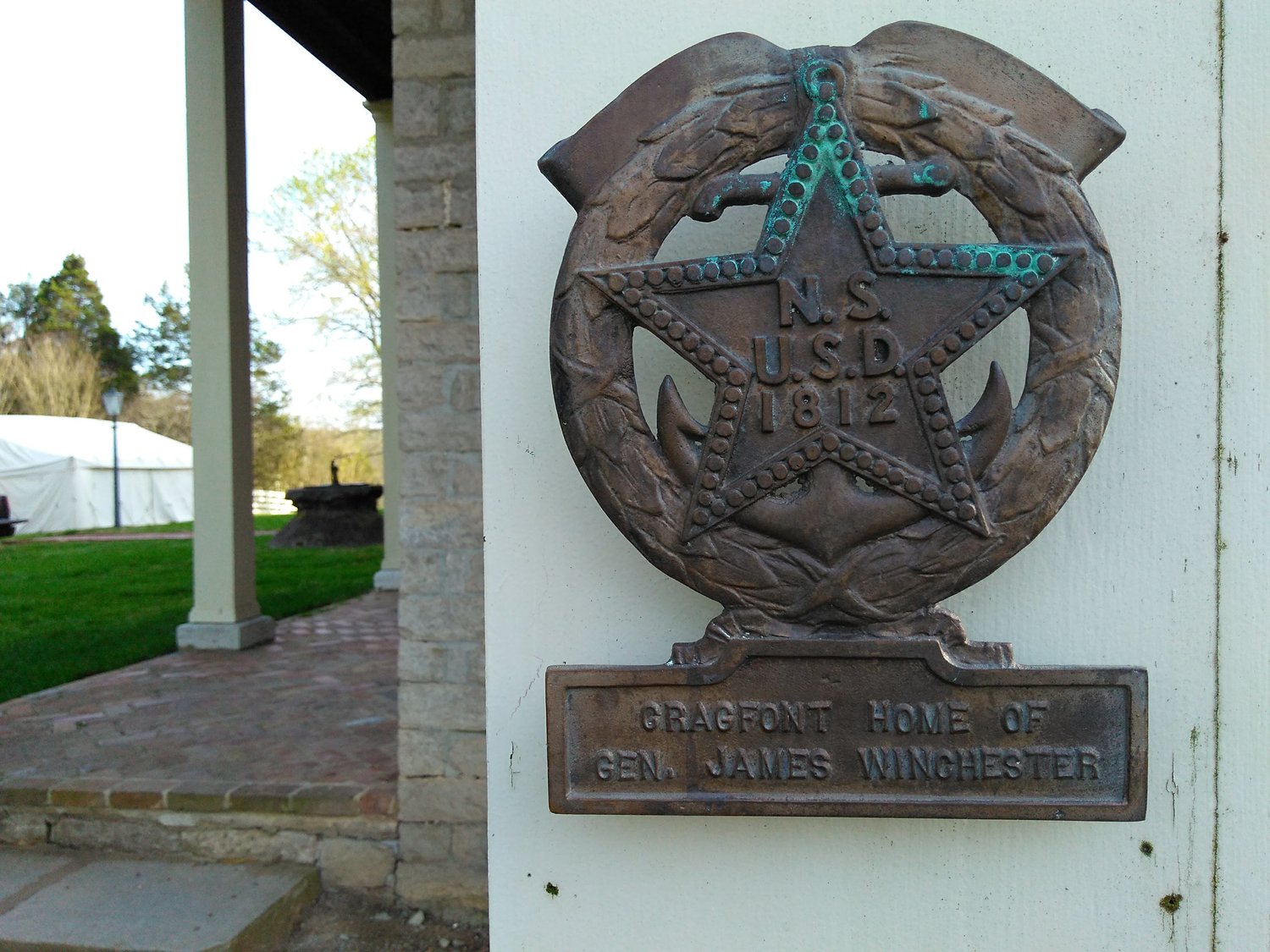