Edit: I was asked by the Museum due to confidentiality (which I was not aware of at the time) to remove the decision-making processes and specific cases we looked over, which I have done. What follows in italics (save the usual under-image commentary) is what I have added post-edit.

Our class was introduced to a difficult topic today, in regards to crime museums and the displaying of sensitive materials. 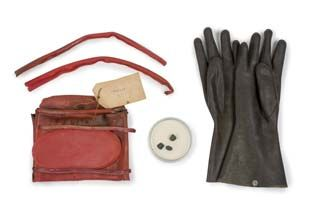 We began our class by breaking into groups and looking at the websites of some crime museums spanning three continents: the UK, US, and Australia.

I've linked to some of them here:

We were provided with a list of questions to ask ourselves, and as time was short (due to one-on-one meetings with Susie about our papers due on Thursday) each group had a few questions to discuss and them elaborate to the group.

Here they are, question and each group's answer, in brief: (Note: These questions were not edited.)

A lot of the museums seem focused on the "blood and guts" aspects of crime, i.e. there's nothing mentioned about insurance fraud on the websites.

There is definitely sensationalism going on, in some more so than others (case in point, museum No. 3, the True Crime Museum). Others, like No. 2, seem more educationally minded, though it too has a "Wild West" shooting gallery so it's a bit of a mixed bag.

It comes down to the audience one is looking to attract, what their focus and interest is. And let's be honest, criminals and the "glamour" of crime draw people, hence varying portrayals of crime.

Either through sensationalism via headlines and pictures or straight forward through titles.

The Australian museum is covered in photographs of gangsters, who look rather glamorous.

This last question wasn't fully answered, because we were to get a taste of these issues in a real-world environment at the Museum of London.

The curators of the Museum came into this situation when they received orders to display the collections of the Metropolitan Police for one of their temporary exhibits, scheduled to run from October to April.

This collection is held in the museum of the Metropolitan Police based in Scotland Yard, and is not open to the public. In fact, this is the first time it will be seen by the public at large. It was founded in the mid-1870's and contains objects tracing back to specific crimes, for instance the Great Train Robbery of the 1960's, the Millennium Dome Robbery in 2000, crimes relating to counterfeiting, execution ropes and masks, etc. etc. The collection is overseen by a curator who is also a former police officer, and it has no formal written collection policy, although it does make deliberate decisions on the same. A lot of the items came from items seized by the police that were then forfeited to the department (unlike in the past when it would go to the Crown). If unclaimed (i.e. found guilty and thrown in jail for life or executed) the police department would keep the items and they would go into the museum.

From 1890, the collection was known as the "Black Museum", however the Police don't like this term (negative connotations and all), so the Museum was careful to refer to it as the "Crime Museum", although some members of the media continue to refer to it by its former name.

The Museum decided to pursue a policy that would avoid sensationalism and focus instead on the victims and the investigators who solved the crimes instead of the means of the crimes and the criminals who committed them, as such, there is no photography whatsoever permitted in the exhibit.

Ms. Hoffbrand went over the layout of the exhibit with us, and explained what would be found in each:

The Introduction consists of the entrance, in which a (borrowed) police car is located. This space is intended to prepare visitors for entry into the Crime Museum, sharing a bit of the collection's background, the nature of what they are about to see, emphasize that these are real cases with real people, and share key questions that will be raised, including those on ethics.

Next is Reconstructing the Crime Museum as it would have appeared from about the 1870's through 1900. The early collection consists of 19th century crime, showcasing execution ropes and death masks, and includes famous cases from the time, like those of Charles Peace (1879; cat burglar, collection has his violin (he was musical), wooden folding ladder, jimmies, lamps, etc. He was eventually caught and hanged); Annie Parker (1879; in prison for over 400 cases of drunkenness, she embroidered a little pillow using her hair and gave it to the warden); and of course the notorious Jack the Ripper (1888; from 1888-91 he murdered eleven women, the museum has a poster with his first reproduced letter giving him his title, and a book where a cop names who he thinks the Ripper is).

Following that is the area devoted to 24 individual Case Studies, dating from 1905 - 1975. There are two main strands: those of the individual, a particular moment in time; and those in thematic clusters that take a broader view. This area is focused on the people: the perpetrators (criminals), victims, and the investigators. The objects themselves are pulled from the Crime Museum and had often been used for evidence. An overriding idea is to use the objects to illustrate developments in investigative techniques and the laws themselves, rather than have them be there as mere eye candy or things for people to gawk at.

Some of the individual cases include that of the Statton Brothers, who in 1905 murdered Thomas and Anne Farrow. In the home was found - in addition to the bodies - two masks made of stockings and an empty cash box. There were witnesses who saw two men leave the house; some swore they were the brothers while others were unsure. Eventually the cops took the cash box and used an early form of fingerprinting on a thumb-print found on the cash box that was shown to belong to one of the brothers. The prosecutor went over the new technology of fingerprinting for the jury, who were convinced of its use and subsequently found the brothers guilty; they were hanged.

Another case was that of David Greenwood, who in 1918 was found guilty of murder based on two small objects found at the scene: a button and a metal tiger that he admitted was his but said he sold to a man on a train. His sentence was commuted to life imprison due to the circumstantial nature of the evidence; he was eventually released in the 1930's.

The thematic cases range in date from the 19th, 20th, and 21st centuries.

In the last area is the concluding space, in which visitors are given a chance to reflect on what they've seen, and that includes a video by the curators talking about working on the display and the issues they faced, as well as a bit by an officer at the Metropolitan Police on the future of the museum.

Ms. Keily spoke to us about the ethics of the whole thing, and how the Museum was guided throughout by the Museum Association's Code of Ethics (which you can read here).

As an exercise, all five tables in the room were given an actual instance that Ms. Keily and Ms. Hoffbrand came across while working on the exhibit. There was information on the case, the objects held that could be displayed, and the question: Should this/these object(s) be used in the exhibition?We were told to go ahead and decide, then after we had discussed our decision they would tell us what the Museum decided to do.

All of the objects for the cases given (save three non-personal items) were deemed unfit for display, not only by our groups but by the Museum itself. The REASONS given by some of my classmates, however, I found to be highly objectionable, in particular with regards to this case.

The idea was put forward that there might be people who view the display who don't think what happened was a crime, and whose cultures condone the actions of that man. As in, we shouldn't show it in a crime museum because they might not agree that it was a crime. And I will say I did speak up, saying that it is our duty to stand up when we see something that is wrong, irregardless whether or not some people think it's right. Someone said it wasn't the Museum's job to state what is right and what is wrong, to which I responded that the Museum makes a strong statement in one of its displays on the wrong that was slavery. The answer was "Well slavery is wrong," and I replied "So is murder. This was murder," and murder is never to be tolerated. The incident was classified as "murder" in the file, so it was technically open to being installed in the exhibit on crime, cultural "sensitivity" aside. In the end they decided not to speak of the incident at all, and went to great lengths to make sure information from the case did not reach the public by way of the Museum or its exhibit.

The Museum found itself in admittedly tricky situations, where the desire to be sensitive and not overly provocative in the end outweighed the need to tell the stories of the victims in their entirety, despite the discomfort it might cause.

I am obviously on the side of telling these stories, but I understand why the Museum chose not to. After all, they have the lovely world of politics, funding, and media/visitor relations to deal with, while I do not. The Museum's mission is not to stir the pot and seek out controversy, but instead to tell the stories of the people of London, even when they are difficult tales to tell.

Perhaps in the future the most difficult stories of all will also be brought forward, but until then, they will be resting quietly in the Crime Museum, serving as poignant reminders of the great issues of our time.