We had round one of our first assignment today, in which we each give a ten-minute oral presentation on an object of our choice that we propose should be added to the collection at the Museum of London.

The eight objects given today were as follows:

Picture of the London Bridge, held in the British Museum: 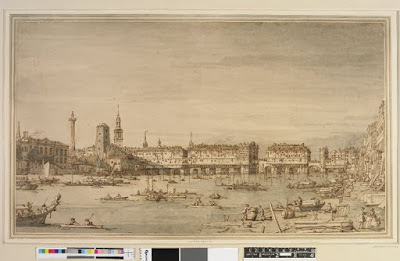 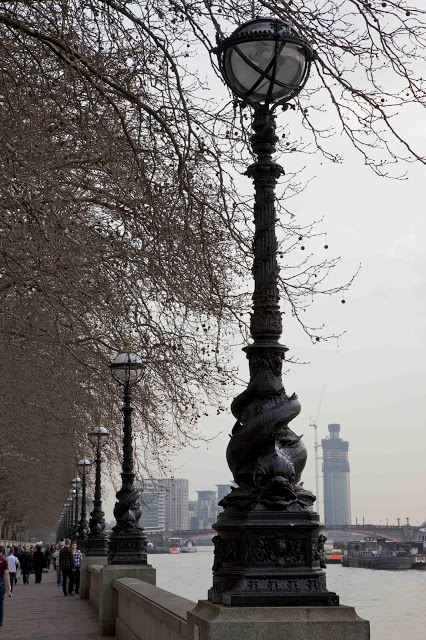 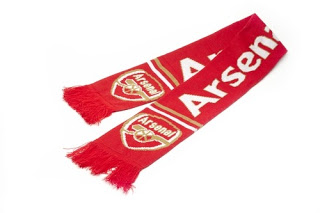 Wigs - used in the courts by lawyers: 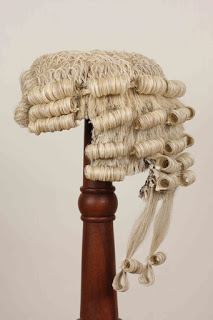 The Burning of the Houses of Lords and Commons, currently in the Philadelphia Museum of Art (the other is in the Cleveland Museum of Art): 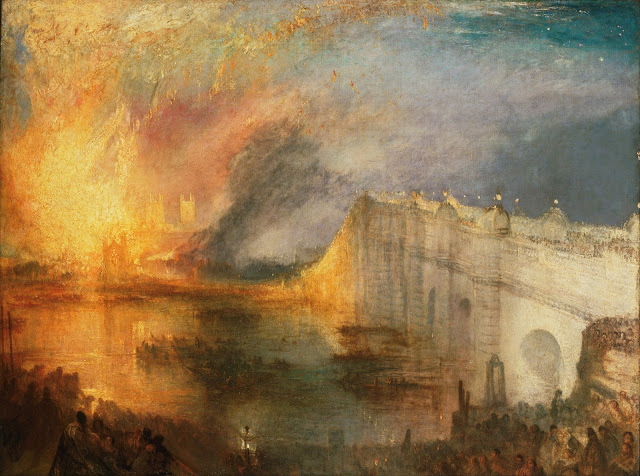 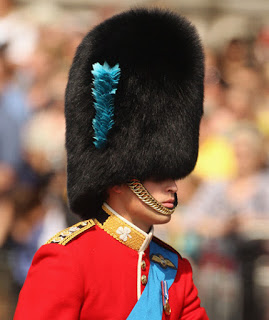 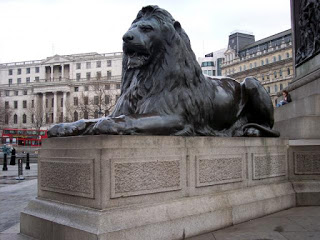 and of course the ubiquitous London Eye: 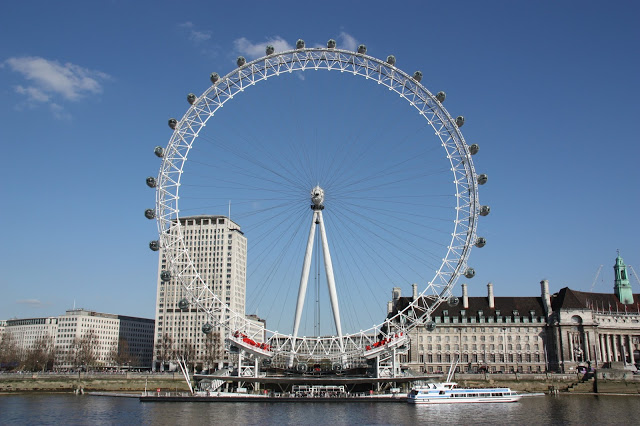 Our presentations left little time for formal class discussions on our topic of the day, Curating Difficult Knowledge. We used World War II and the Blitzkrieg ("Lightning War") as the death and destruction visited upon London fits in with the question posed, "How [do we or should we] engage with horrific pasts? " Unfortunately we only had about a half-hour to discuss one question per group and no time in order to share our responses.

However, we were able to look at three different objects held in the Museum of London and discuss if they do or do not speak to the issue at hand:

Up first, a gas mask bag. 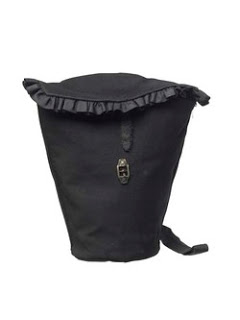 We thought this bag and accompanying story did a good job of humanizing the difficulties of living through a war, and therefore succeeds at curating difficult knowledge.

Next was Devastation 1941 City / Panorama of Ruin, done by Graham Sutherland in response to the bombing of London in World War II. 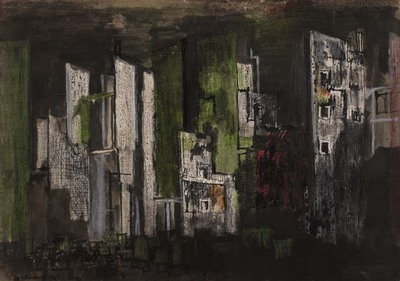 People didn't respond as well to it, believing it to be an obvious fabrication and therefore not as reliable as say, a photograph of the same area would have been. I rather liked it, as it provides a look into how the devastation was viewed by the artist, who portrayed it in unreal, sickly greens.

Finally was this incendiary bomb: 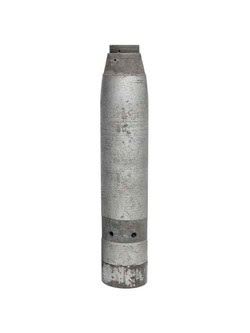 The bomb was a bit of a mixed bag, people liked the physicality of the thing itself but would like to see it next to a photograph, perhaps showing where it had landed and what sort of damage it had caused.

A very common theme (and a bit problematic, if you ask me) is this almost blind faith in the veracity of photographs and their absolute infallibility in providing the complete story. 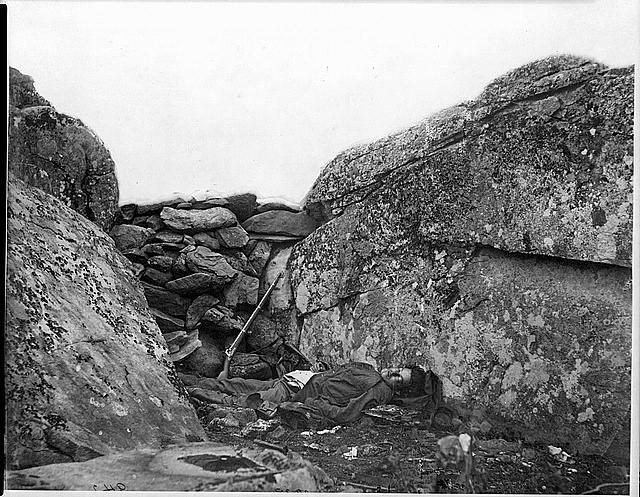 Our visit to the Museum today was to include a trip into the Paintings, Prints, and Drawings Store, so perhaps there was something to be gleaned on the topic there.

First, however, upon being split into groups, my group was to go to the Printed Ephemera Store with Beverly Cook, Curator of Social Work & History.

Right off the bat, what is ephemera? To put it simply, ephemera are minor transient documents of everyday life, things that are printed or produced in writing for everyday events, such as tickets or posters. These also include personal effects, like letters or invitations. Most of the Museum's ephemeral collections are post-17th century, but there are several pieces dated earlier than that. One such is a Warrant of the Queen, dated 14 June 1602 and is signed by Elizabeth I, another bears the signature of Charles I, dated 1641 (eight years later he would be executed by Oliver Cromwell and his supporters after the English Civil War).

Some of this collection is stored in the Museum itself, other parts elsewhere. We were permitted into the room holding the boxes - the very same we saw yesterday in the Christina Broom exhibit, that look like scrapbooks in a box - and were told they cost 25-30 pounds per box. Such prices (plus the costs of maintaining the proper temperature, humidity, and light levels) make holding such collections a massive investment.

This means the vast majority - around 90% - of what is offered to Ms. Cook as potential collection material is rejected. Indeed, a lot more ephemera is rejected than is any 3-D item. The reason for this is that people are quite predictable in what they collect (passports, WWII ration books) and paper and printed items are much easier to store around ones' home than most other things. "If I had a pound" - paraphrasing Ms. Cook - "for every World War II ration book that I've been offered, I'd be a very rich woman."

A lot of the collecting done by Ms. Cook has been described above, called "passive collecting." This is when she sits at her desk and waits for the phone to ring, an email, or an envelope filled with printed ephemera lands in her mailbox.

The other, more proactive approach is tied closely with the contemporary collecting the Museum partakes in. "Contemporary" in this context has a very loose definition, it can mean one year with some museums or as many as fifty with others.

There is lots of ephemera around today, meaning the Museum must be very restrictive and engage in project-based collecting in order to keep from being completely overrun. For instance, they collect anything big - such as the 2012 Olympics - or anything unexpected and impacting, as in a terrorist attack.

The curators work closely together to maintain their streamlined approach in their collecting activities.

Ms. Cook maintains that the collections held in the Museum are not archives, the exception being the archives of the Port of London, held for PoL by the Museum of London: Docklands.

The Museum is interested more in the display potential of an object, and as Ms. Cook says, "[it's] nicer to learn from ephemera than archives." If a curator wishes to add something to the collection that may not have much or very limited display potential, then he or she must justify their decision to the directors first.

This is in part to help curb an issue that sometimes arises when a curator allows his or her personal interests to seep into the collection itself. The Museum of London has a large theater collection as a result of such curating that occurred with a previous curator. Apparently, he was very interested in the theater, and collected a great deal of material about it - and there are boxes filled with theater programs to illustrate the point. This is poor curatorship, and as a result the collection is "underused," leading to doubt as to why it's here.

Not to say that the theater collection in its entirety is useless, a different curator over one hundred years ago began collecting something called "theatrical portraits," which I had never heard of before. Back in the mid-nineteenth century, if a man (or his family) went to the theater and enjoyed the production, he had the option of purchasing a portrait in the form of a drawing of the famous actor so admired. Once at home, the picture could be colored in or decorated using special decorations, often of fabric or tinsel. 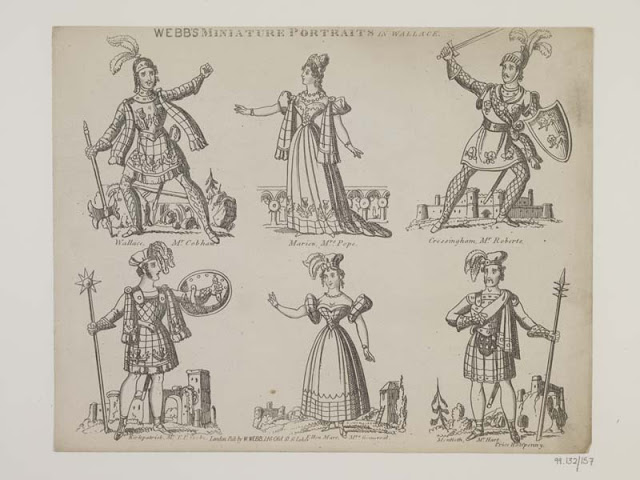 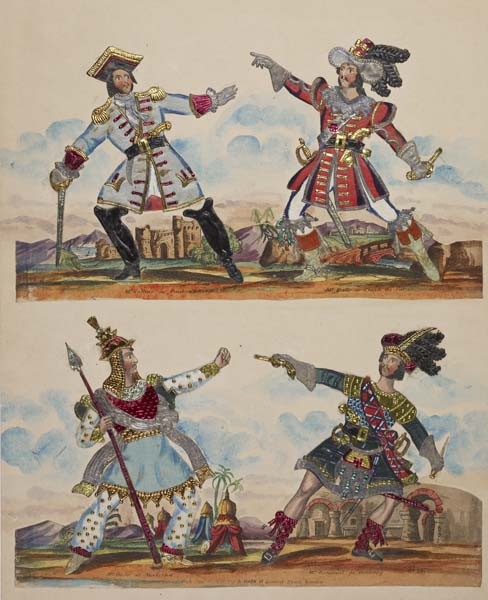 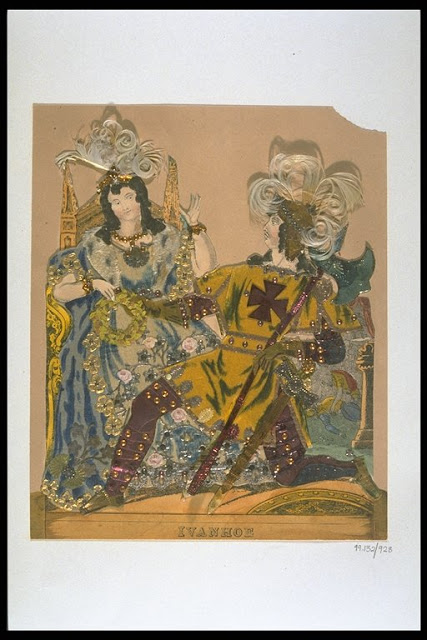 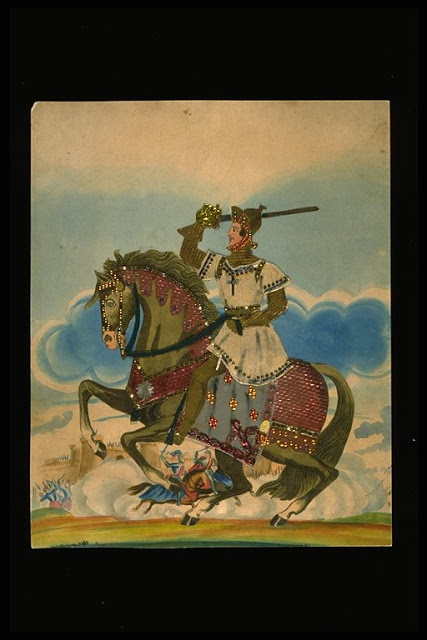 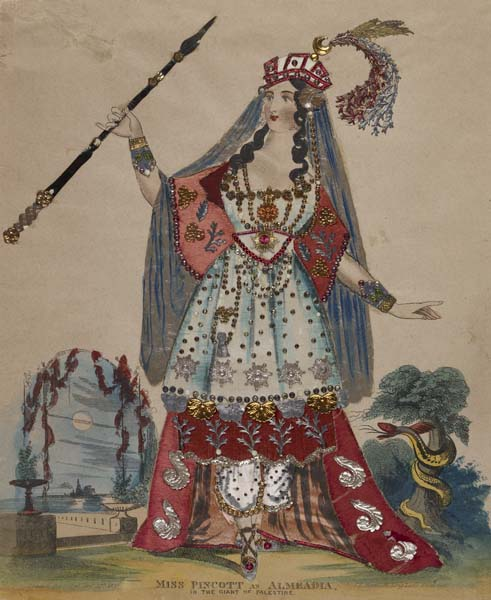 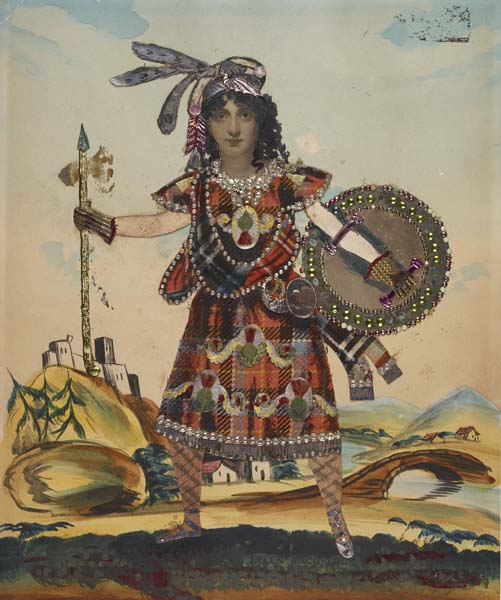 In order to gain more of the above and less of the stacks of programs, every piece must undergo a formal "acquisition process," which the curator decides whether or not a donor-proposed object even begins at all. If they choose to move ahead, the curator must provide a statement of significance to the directors, and they must prove the person offering the item is in fact the rightful owner.

To end her talk, Ms. Cook showed us an item she just acquired, and a rather unusual one at that. It was the original Jaeger company employee list, given by the great-great grandson of the founder. What made this book significant (and it was a large book) was the inclusion of not only the employee's names, but also of their addresses and an account of the time they spent with the company, providing a fantastic social history. It was approved for acquisition on those merits.

We left Ms. Cook with a little homework assignment, to "think about where you come from and what you would collect" to describe it. I'll tell you mine tomorrow, but for now try and come up with one of your own.

We were then sent on to Francis Marshall, Senior Curator of Art, down in the Prints & Drawings Store, where we were to discuss the War Artists of WWII. Obviously, the paintings we ended up looking at dealt with none other than World War II.

The Painting Store itself contains around 20,000 objects, most of them on paper. Four hundred of them are paintings on canvas, and the collection spans the 1500's through the present.

The ones we were concerning ourselves with were originally commissioned by the War Artists Advisory Committee, a branch of the government concerned with keeping artists working during the War and also trying to prevent them from dying. They therefore employed artists to record the War, some on the front, and some on the home front.

We looked at four: 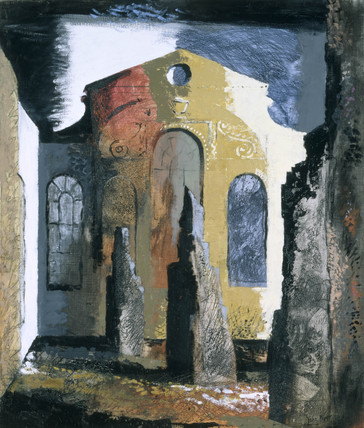 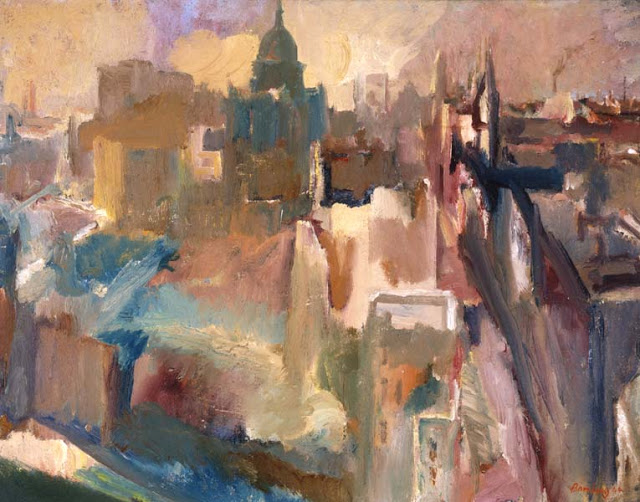 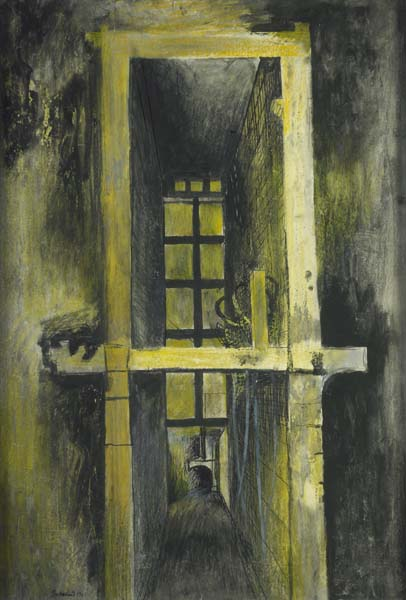 And one more, by a R. V. Pitchforth depicting the twisted, skeletal metal hunks that were once lift shafts laying across piles of rubble, that I cannot for the life of me find a copy of online.

For some reason people (at least in my class) do not like paintings and illustrations as much as they do photographs for story-telling purposes. The word "bias" always comes up, as if something painted by a person's hand is inherently more so than the same scene snapped by that same person's finger. It is true that photographs by their very nature encapsulate a moment in time with lightning-quick precision in a way that other forms of representational visual art cannot. But that they are automatically free from bias? Is not the direction the camera is pointed, the very choice of subjects chosen for representation, evidence of bias? A picture says a thousand words, and it conceals ten thousand others.

I think a truer accusation to throw against paintings, drawings, etc., is that of stylization (although photographs are not free from this), which the budding historians in my class seem to instinctively shun.

Below is a photograph taken from a bomb strike on the HMS Illustrious in January, 1941. 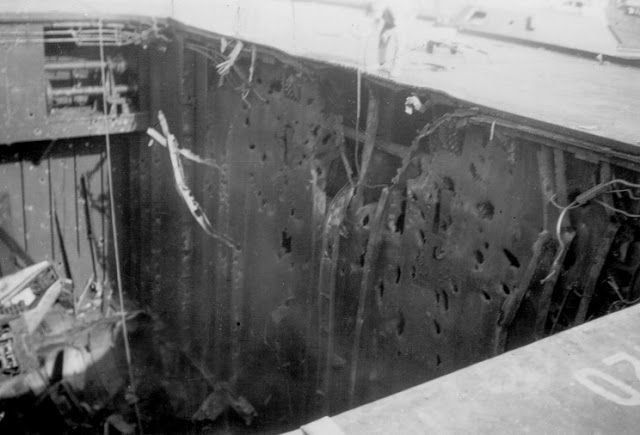 Compare these two images, that of the painting and that of the photograph, each depicting bombed lift shafts. It is true that the latter shows detail as it was when the photograph was taken, more so perhaps than the painting. But what do the people on board feel about it? How has it impacted them? What would they say the damage means to them? Presumably they do not like it, it has negatively impacted them, and it means things will be more difficult as they clear and repair the damage. We assume, but we cannot know for certain. Photographs like this, despite their clear merit, are often sterile in these factors.

The painting, however, is very clear in its representation how its author felt about the subject. It is depicted in a confining, tight composition, with sharp dark lines contrasting with sickly yellows and greens. In fact, the entire thing looks slightly nauseated, a ghastly pallor cast over a silent, cage-like contraption of black metal beams.

It makes me uncomfortable. I don't like looking at it. In fact, I find it much more disconcerting than the black-and-white photograph of a similar subject, albeit on a ship. I believe it's because the painting provides a look beyond what is there, into the psyche of the artist and even into that of those who lived through the horrors.

Is there a place for photographs? Absolutely. To say otherwise would be incredibly foolish indeed.

Equally foolish would be the dismissal of paintings from the discussion, for they bring a level of personification and depth, of internalization and reflection, of power and subtlety, that cannot be disregarded or undervalued.

Stylization is not a crime, but a very important asset. Let's begin to treat it as such.