The object that I am proposing be added to the collection of the Museum of London is a Worth wedding dress worn by Clara Mathews on her marriage to Colonel Hugh Stafford at St George’s Hanover Square on 19 February 1880, currently held in the collections of the Victoria and Albert Museum. 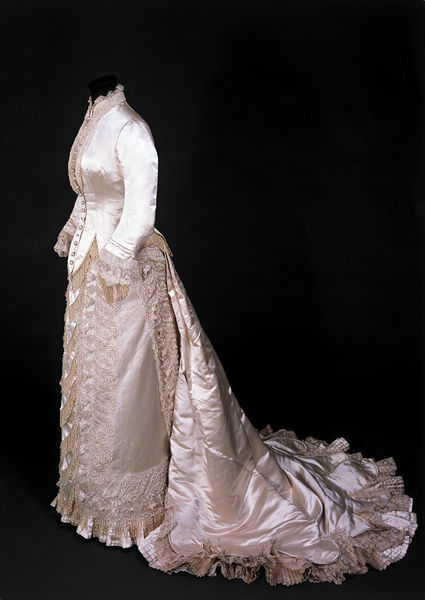 Women’s clothing of the time period is defined by the bustle, a wire cage or horse hair pad used to extend the posterior of the dress, allowing for an increase of draping and space for applying trim.

The dress was made in Paris, from 1879 – 1880, by Charles Frederick Worth. This particular gown consists of a cream silk satin bodice and skirt with a separate velvet train. The bodice has a high neck, long sleeves, with pearl fasteners, and the lace trim at the neck and down the center front is machine made. The skirt is also made of cream silk satin and is pleated at the back to allow for a bustle. The front and hips are trimmed with embroidered flowers on net panels, and the train is made of cut and uncut velvet. Inside the bodice on the waistband reads “Worth 7, Rue de la Paix.”

Worth was an Englishman who came to Paris in 1845, ten years later he founded the first modern haute couture there. His idea to prepare a collection in advance and then present it to clientele was entirely new, and highly successful. With Worth came the involvement of creativity in fashion, and the commercial spread of his creations to various nations, including England, and particularly London.

As Paris’ leading dressmaker, Worth’s costly creations appealed to an international clientele base, especially wealthy Americans, of which Clara Mathews was one. Miss Mathews was a natural daughter of Isaac Merritt Singer, of the Singer sewing machine company. Her position would have enabled her to go to Paris to order her wedding dress directly from Worth, who began work on the dress in 1879, completing it in 1880, in time for the February wedding.

I didn’t have much trouble determining the suitability of the piece for the collection of the Museum. One nice thing about wedding dresses is that so often exact provenance is known: we know who wore it, when she wore it (down to the day), where she wore it, and why (obviously). An original Worth gown is an original Worth gown, and this one was made when Worth was still alive. I searched the Museum of London’s online collection using Worth’s name and nothing came up, and I must therefore conclude that they do not have any of his work, making this a worthy (pun) addition.

I believe this dress has a high research and educational value, for it is indicative of a societal structure change that was occurring in London at the time.

In the article “A Museum of Fashion is More Than a Clothes-Bag, the authoress, Valerie Steele, speaks of her influential professor at Yale University, Jules Prown, arguing that “artifacts are primary data for the study of material culture, and, therefore, they can be used actively as evidence rather than passively as illustrations.”

Such is the case with this dress, or perhaps more importantly, also in line with the Museum of London’s philosophy, in telling the stories of the many people touched by the dress, whether literally or figuratively.

That of the designer Worth was previously told.

It is to Clara Mathews, the bride for whom the dress was made, that we now turn. Clara was an American heiress, who came to London and ended up marrying an Englishman, Colonel Hugh Stafford, at St. George’s Hanover Square. I was unable to find any more details about either of them, except this very important note on Clara’s lineage: She was a natural daughter of Isaac Merritt Singer, the sewing-machine pioneer who founded the company that still bears his name.

The sewing machine was brought to Great Britain from the United States, with the majority of the market being dominated by Singer. Records show the greatest number of Singer machine sales occurring in London, as the middle-class woman recognized its benefits to domestic comfort, and the working-class woman seized its protections against financial ruin. In Britain, the majority of sewing was done by an exploited class of female dressmakers and homeworkers, for them, the acquisition of a sewing machine often meant the difference between living in near-destitution and earning a comfortable living.

The fact is that this dress ties so many stories together simultaneously occurring in London: that of the evolution of the fashion world via Worth; the intermarriage of different nationalities and classes via a British soldier and an American heiress; New Money and the Second Industrial Revolution via Isaac Merritt Singer; and the middle-class housewives and working-class seamstresses whose lives were so changed through Singer’s sewing machine. As such I believe it demands a place here in the Museum of London.

Of course the dress itself is beautiful, the workmanship is stunning, and I think it would do very well for itself as a stand-alone item (perhaps in the glass case currently occupied by some large feather fans, next to the Selfridge lifts) or worked into the greater display area dealing with changing society and the Second Industrial Revolution (it could be fleshed out with an original Singer sewing machine, for example.)

I’m no accountant, and prices of previous antique Worth sales are hard to find, so I do not know how much this dress cost to acquire. However, maybe someday fortune’s happy hand will tip the Museum’s direction and the V&A will be looking to offload the dress for a pittance. If they should, the Museum of London would be the perfect place for the dress to find a permanent home, on display and ready to be admired again, and with quite a few stories to tell.

Boucher, François. 20,000 Years of Fashion: The History of Costume and Personal Adornment.