Any day one gets to handle actual artifacts at a museum is an exciting day.

Today was an exciting day.

Julia Hoffbrand, curator of Social and Working History, lead our session, providing insight into the history of the Museum of London and its mission throughout the years.

The Museum of London officially opened in 1976, but it traces its roots further back, hosting collections from two previous museums: a nineteenth-century antiquary, and the London Museum, founded in 1912. Ms. Hoffbrand referred to museums as being "prisoners of the way things were done before," that is, all museums find themselves both indebted and encumbered by past curators and administrators, and the legacies they left behind. Indeed, the very objects in the collections are reflections of what previous curators saw fit to amass, and are sometimes very different from what we today find interesting or important.

The original London Museum was set up as an homage to the Royal Family and was very patrician in nature. Queen Victoria had died eight years prior, in 1904, and the patriotic idea of the Golden Age of imperial Britain ran high.

The curators sought to establish their museum as a "Mirror of London," saying "We wish to acquire objects of historic and local interest to Londoners and to exhibit many things that would find no place at the British or Victoria and Albert museums . . . " that is, a museum for Londoners, reflecting London's rich and varied history back for her people to see. 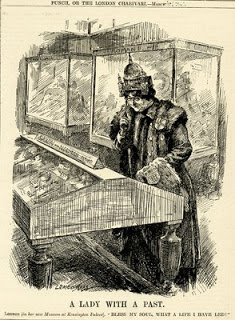 Hence the London Museum began "contemporary collecting," taking in what were then modern pieces the more serious and intellectual museums shunned: cheap penny toys, items from the suffragette movement, flapper dresses whose wealthy owners no longer cared to wear them once the loose, baggy silhouette of the mid-1920's shifted to the more fitted styles of the 1930's. 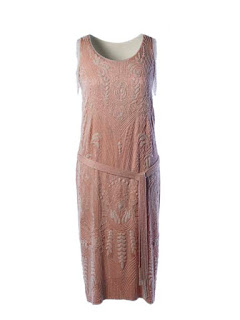 Of course, the "contemporary" collecting done by the Museum in the 1920's, when the items were cheap and of little historical value, are now veritable antiques and extremely precious from historical, scholarly, and - to be blunt - financial viewpoints. These pieces, while successfully fulfilling the mission of "mirroring" London as she is, have as time continues on preserved London's rich and highly varied history.

But merely holding and preserving these pieces are not enough. The Museum of London seeks to be the mirror of the City. One does not hang a mirror on a wall, shut the door, lock it tight, and refuse to ever gaze into said mirror again (unless of course one is an angst-filled teenager suffering from a particularly bad breakout, but this is not my own personal narrative and therefore does not apply).

The Museum wants Londoners and non-Londoners alike who want to learn more about the city to come in and gaze deeply, lovingly into the mirror, to find much to admire and maybe a blemish or two that needs dealing with. And so, the Museum asks "How do visitors consume and enjoy exhibits?" Ms. Hoffbrand says the Museum has always been fairly radical. In other words, they were engaging in immersive displays before it was cool.

For the Museum of London, the objects are the means to the end of telling the very human story behind them, the stories of the people's lives who used them. Ms. Hoffbrand started us off with a very simple exercise: If you could pick one object from your home, what would it be, and why? Our class had a variety of objects:

A list like that is really just a list. Imagine all those things just sitting in a case. They are meaningless. Now look at the reasons they were chosen:

A gift from my father
An heirloom passed down through five generations
A quilt made by his mom from shirts he wore throughout his childhood, gifted at graduation
A memento of happy times
A prayer written by hand by her late grandmother on the occasion of her Confirmation
A beautiful antique heirloom
A leaf chosen and pressed from each location visited, from all over the world

What just about all had in common were the strong emotional ties held by each piece, memories of loved ones and of pleasant life experiences. That's what the Museum of London tries to capture in each of its displays.

But what to do when the owner(s) are long gone, and unable to tell their stories?

Hence the second part of our class, in which each group (five in all) were presented with a tray of actual objects owned by the Museum, and told to have at it (after donning the inevitably sticky blue gloves, of course. No greasy fingers on the historical artifacts, if you please). 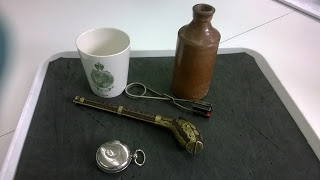 Carefully handling, turning, opening, and examining the objects, we tried to figure out what each was used for and maybe something about the owner, such as gender, status, etc. I'm about to tell you what each of our items are, but go ahead and take a guess about some of the things you see there, though granted you're at a bit of a disadvantage as you can't touch and examine them closely for yourselves.

Do you have your guesses ready? Here we go!

The white cup was a souvenir item from the coronation of Edward VII in 1902. His face is on it, along with the date and a blip about his "Majesty's Royal Coronation."

The stoneware bottle was used for the blackening liquid used on shoes.

The "gun shaped" item was a protective case for a clay pipe (the "bowl" part opened).

And the little silver circle is not a pocket watch: 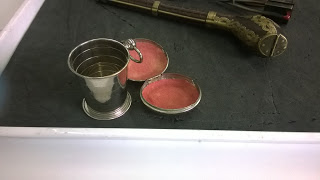 It is in fact a tiny portable cup not unlike a shot glass, carried around in the manner of a watch but for perhaps less industrious purposes.

We all had a chance to share with the group collective and explain what we thought the items were at first (whalebone stays mistook for pasta, - I did not make that up - a dollhouse-sized fire poker for a toothpick). It was really interesting to see how twenty-five things that items no longer commonly used (a button hook - quickly fasten your button-up shoes!) and therefore not instantly recognizable were able to be sorted and puzzled out by a group of twenty-two fairly inexperienced college students in a fairly accurate manner. I dare say we were all rather pleased with ourselves.

Such ended our second day at the Museum of London, with sweaty palms, happy thoughts, and an overwhelming desire for a little shot glass key chain of our very own.