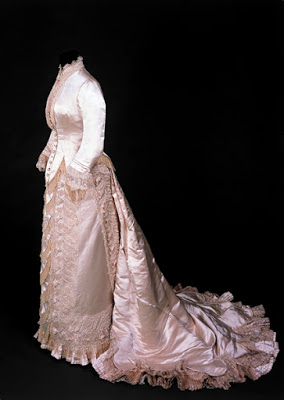 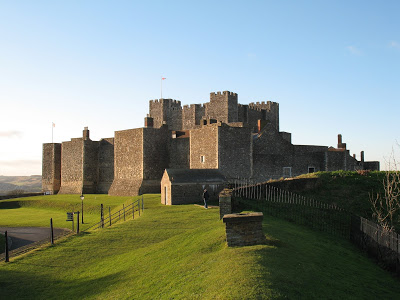 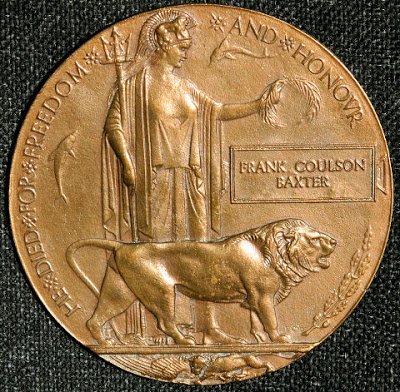 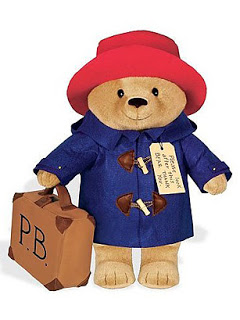 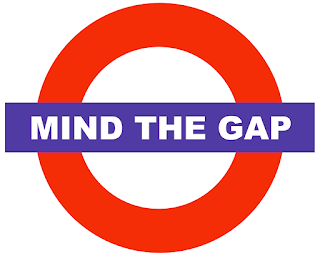 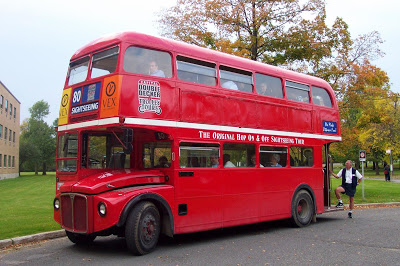 And last but not least, a self-portrait of Roger Fry: 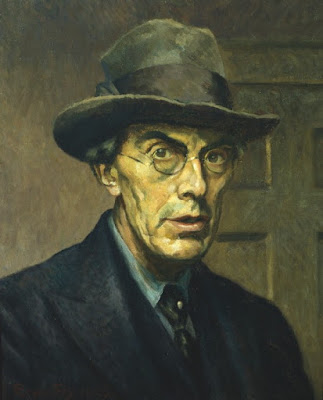 With those out of the way we were free to breathe a collective sigh of relief, and move on to Swinging London, or London in the 1960's.

So what do we think of when we think of the 60's? What were those years like? What did people do, think, and value?

Perhaps those of you who lived through them could come up with better answers.

We were shown some film clips from the time, of people just milling about on the streets of London, and were told to look at their clothes and try to deduct from what they were wearing clues about the time. In essence, what can we learn from mute clothing?

Valerie Steele, in her article A Museum of Fashion is More Than a Clothes-Bag, tells of the steps her influential professor at Yale, Jules Prown, taught her to use:

Our first film lead to the general conclusion, that young women's clothes were short and loose, while those on older women were longer, and they continued to wear hose. In contrast, the men's clothes were tight and stylized.

The second was the very beginning of a film on the Beatles' timeline, were they started out wearing really dapper suits. We didn't get to the end, but we did see some crazy females screaming their lungs out over those shaggy-haired guys, and some other girls dancing all over the place like wild women.

We also viewed three items dating from the 60's held in the V&A: 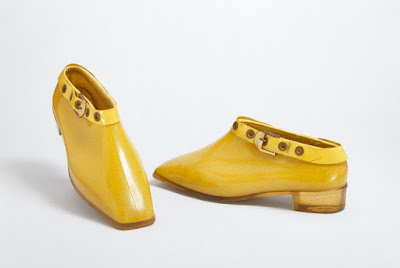 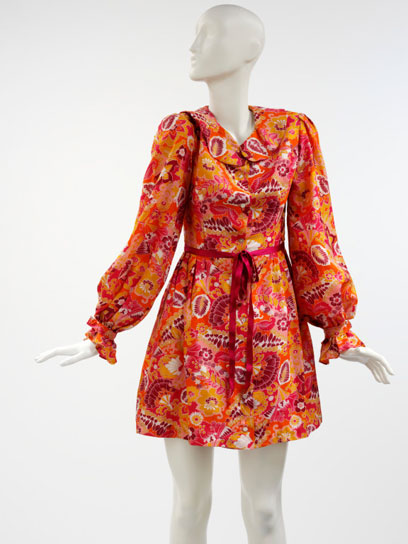 I think the overall impression was freedom and movement, though the tops of the dresses stayed fairly modest while the legs came out. So don't show all your cards at once, ladies.

Then, joy of joys, we were headed back to the Costume Shop in the Museum of London.

However, since our group is too big to fit in the Shop room all at once, we were once more split into two and I had the pleasure of doing a little activity in the Museum with Beatrice Behlen, Senior Curator of Fashion & Decorative Arts first.

There's a special case near the end of the displays called the "Show Space," an area of the museum where slightly unusual objects can be displayed in a different way. Three glass cases are present for the items to go in, and there is room for up to four cards of fifty words each to describe them, but sometimes less because the curator ran out of things to say. The thing about these displays is the curators are in complete control, and do everything themselves (as in no graphic design department printing out the cards and making them look pretty), and they can say things that usually one wouldn't find in an official museum display, being a bit irreverent, talking about damage to the item, or openly admitting any unknown information about an item.

Our assignment was to go around the Museum, find something we'd like, and write one caption about the object, one about the context, and then one more about something else, a quote or anything else we feel is relevant.

I picked this, my answers to the questions follow: 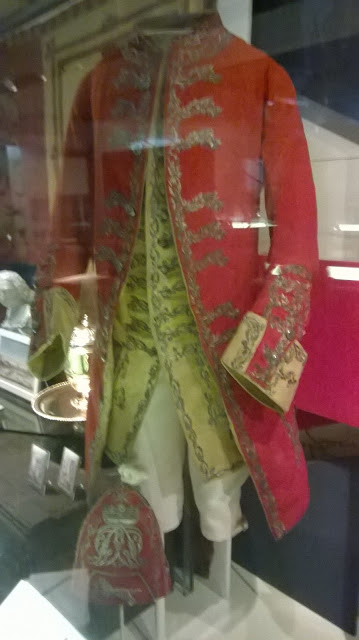 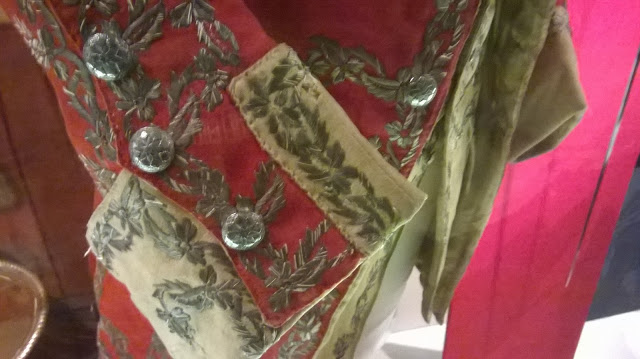 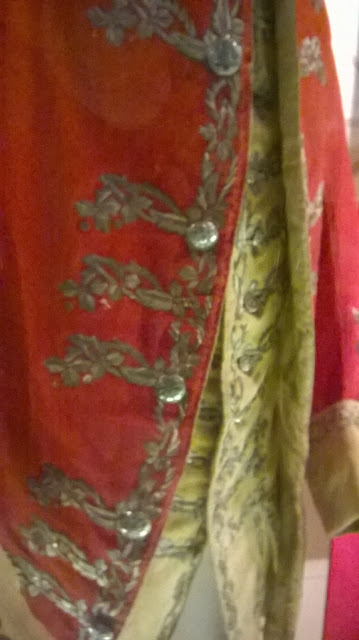 This uniform belonging to Colonel Richard St. George, and was probably worn during his service in the 8th dragoons around 1743. It would have been made entirely by hand, from the embroidery down to the buttonholes.

Officers' uniforms were very important, signifying rank and authority. Officers were also of the gentleman class, and therefore adhered to a standard of dress and presentation.

Men's clothing is often overshadowed by those of women, but men too enjoyed looking their best, and the fine handiwork and skilled tailoring make the well-dressed gentleman or military man's wardrobe worth going through.

We then went down into the Costume Shop, where Tim Long, Curator of Fashion & Decorative Arts, showed us the styles of the 1960's and told us about the changes that happened in dress throughout the decade.

Again, we were permitted to take pictures, but he asked that we not post them to social media, because the objects most likely will not appear the way the Museum wants them to in the photographs. They want them to look perfectly staged, with the best lighting, and beautiful in every respect, while the pictures taken with cell phones and digital cameras don't provide that.

We thought bright and flashy colors summed up the 60's well, and Mr. Long agreed, but he wanted us to think deeper: Why? Why are things the way that they are?

When scholars consider past time periods, they like to "set the stage," establishing context. So what about the 60's? Like most things, they begin with traumatic events, in this case WWII.

After the War, the soldiers returned home, and the resulting generation born became known as the Baby Boomers. During the 1950's, Christian Dior's "New Look" reigned supreme. 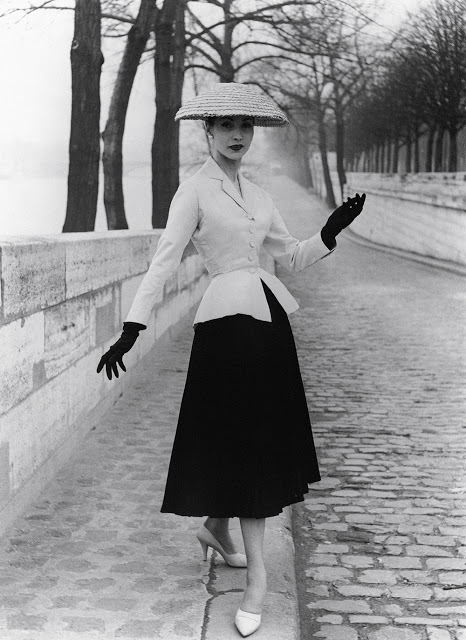 Mr. Long believes the "New Look" was indicative of the mores of the day, that is, the attempted "return to normalcy." Women return to the home, happy and fulfilled in their roles as housewives and mothers, and men return to work, happy and fulfilled in their roles as providers and leaders. In all of this, standing out and drawing attention to oneself was considered unpatriotic.

When their children - the Baby Boomers - became teenagers and entered their early twenties in the 1960's, they revolted against the norms of their parents via the "Youth-quake" (coined by Vogue). In the past, daughters dressed like their mothers. Now, adolescence was seen as a phase in life, and mothers dressed like their daughters.

New was in: fabric was made out of plastic (polyester), and a new breed of super model walked the run way. 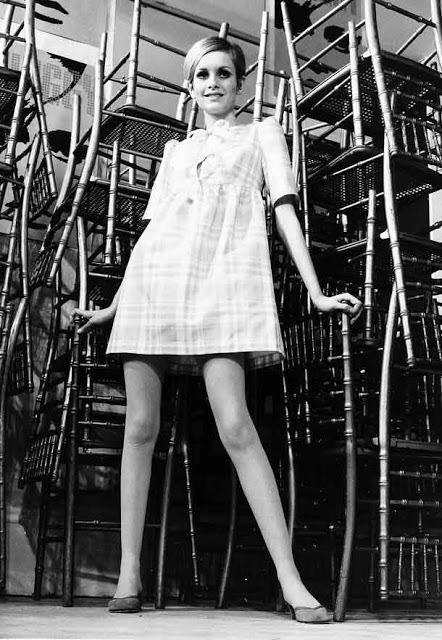 Women also began wearing trousers, which caused quite the stir, and many public places would not allow women in trousers admittance. Similarly, the long-hair trend for men resulted in men being denied unemployment if his hair hit is collar.

The early 60's was obsessed with the futuristic and atomic. The plastic clothes, the atomic-cloud shaped hats, the Vogue helmet-hat.

By the later half, the pendulum had swung to the natural. The Vietnam War was shown on T.V., and the increase in air travel meant images of the exotic were making their way into the styles of the day brought paisley fabrics from India and ethnic cuts.

As the 60's drew to a close, the dawn of the 70's brought the advent of disco and all those accompanying styles.

Fashion is tricky. Some people are ahead of the curve, some people come a bit after. This can make dating items difficult if previous curators haven't done due diligence in finding provenance. Context of the items, from photographs and stories from the people who wore them, including when, where, and what they wore them with, are crucial when collecting today.

For example, Mr. Long showed us his latest acquisition, a pair of pants custom made by Dean Rodgers for the man who donated them to the Museum. They look like old wallpaper, to be entirely honest. He wore them once, to a party in the late 1960's, with a black see-through shirt and white shoes. At the party, someone made fun of his pants, and the comment "took the mickey out of [him]" (hurt is feelings real bad). And so he never wore them again.

Which goes to show, that just because you have some really wild and outlandish piece in your collection, it doesn't mean that everyone was wearing it and that those who did were super cool and completely accepted.

The same is true in 2015. If asked to think about our own fashion and clothing styles, what would you say? What defines us? Mr. Long is sorry to say this, but he thinks there is no defining style. If he took a picture of all of us in that room, there wouldn't be a definite link joining us all together, dating us in the mid-2010's. However, he did say that perhaps in ten or twenty years such a thread may become more apparent. Hind sight is 20/20, after all.

Even today people might be walking through the streets, feeling really good about themselves, and suddenly have the "mickey" taken right out of them. Fashion is fickle in every decade. But it reigns supreme throughout them all.