Such is the over-arching question we began our class with today.

Culture is often the conglomeration of many trends, whether they be straightforward like the clothes we wear and the food we eat, or more obscure, like the social rules we follow and the way we speak.

In today's topic, the analysis and prospective curation of subcultures, the outward expression of values and views through style becomes tantamount: It is through style that the challenge to the values of the hegemony is most fully expressed.

We focused on the punk movement that began in 1979: 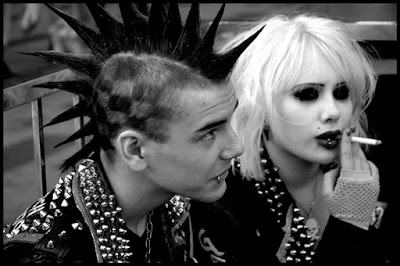 So what is punk?

Like many subcultures, punk centers on music, specifically punk rock. It was originally established in opposition to the rock popular in the 1960's and early 70's.

Fashion-wise, everyday items like safety pins were utilized, along with leather jackets and studs, and the spiky, Mohawk hair. It's a very hostile, aggressive look.

Two famous bands/songs of the early punk rock scene are the Sex Pistols, with their 1977 "God Save the Queen", and The Clash, with "London Calling" in 1979.

In considering how to exhibit punk, we considered four questions (our answers are given as well):

Safety pins, clothing, and maybe some writings, such as lyrics and diaries, to provide insight that mere clothes wouldn't, and having music playing nearby.

Attempt to focus on the difference between punk groups (the Sex Pistols, The Clash, and the couple in the photo above all have distinct looks), and using videos to show how people in the punk movement acted and carried themselves.

One other issue I thought of was the availability and difficulties in tracking down objects. A man who was "punk" in the 70's might have gotten married and started an office job in the 80's, and the odds of him keeping his outfits are probably rather slim. And even if he did, how does a museum get the word out to him and others like him that they are interested in acquiring his old clothing?

Interestingly, this actually came up at the Museum, when we met with Beatrice Behlen, Senior Curator of Fashion & Decorative Arts, down in the Costume Shop.

But first, my group was up in the Activity Space with Jen Kavanagh, Senior Curator of Contemporary History, learning about collecting protest.

When it comes to contemporary collecting, whether protest or anything else, the Museum looks at what is happening now and attempts to: rectify past omissions (close gaps in their collections), give voice to those previously ignored, and capture a fuller, more nuanced record of society while material is readily available.

Perhaps the most daunting task is seeking to future-proof the museum for as-yet-unknown exhibitions and research.

How do they know they're collecting the right thing?

Well, they don't. Not really. But they have guidelines in place to help, and a lot of what they do for contemporary collecting is more along the active and collaborative lines, and some collecting done with future displays in mind (i.e. for the 2012 Olympics).

Collecting "protest" at the Museum has taken place for some time, and include things from protests referring to the Suffragette movement, the neo-Nazis, and those involving nuclear warfare, to name a few. The items include photography and film, posters and other ephemera, costumes and accessories, artworks, objects of all sizes, and oral histories.

Currently Ms. Kavanagh is working on a fairly new acquisition, the protest pieces belonging to the late Brian Haw.

Brian Haw was born in London in 1949; in 2001 he began a protest movement in Parliament Square against the foreign policies of the United Kingdom and of the United States. He camped out in the square from 2001 on, lining up his posters and banners along the sidewalk, he was arrested multiple times, and died in 2011 from lung cancer.

The height of his camp was in 2006; on May 23 over 70 police officers came in and cleared out his camp, taking everything and depositing it in whatever the police department uses as a warehouse for police evidence. 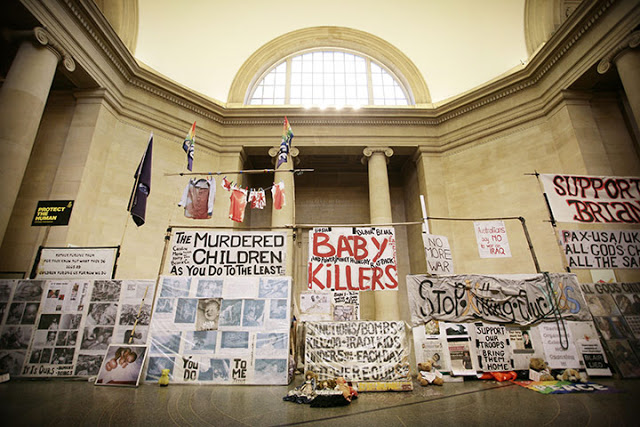 When Brian died in 2011, the police no longer needed to keep his things as police evidence, so they packed it all up and dumped it off with Brian's family. They didn't know what to do with it, and called Mark Wallinger for advice, it was through him that the Museum of London was able to obtain it in 2012.

Ms. Kavanagh's job currently is to go through all of the things, determining what's there and how to best care for them. So far she's gone through about 669 things (most of them were still in the police evidence bags), she has around 100 to go.

As an exercise, we were given six photographs of six objects and invited to choose one, then go over the item in groups and try to answer the same questions the Museum does when going over a new item. 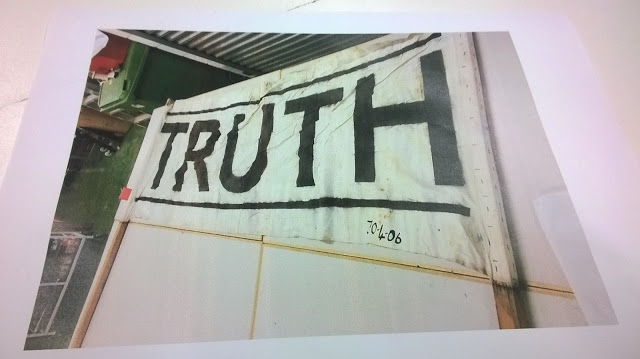 Above is the picture I chose for our group:

There appears to be a small "H" visible in the lower right hand corner, closest to the viewer, which probably stands for "Haw", as in "Brian Haw". So we think it's safe to assume that Brian Haw made it.

Obviously it was displayed, it's a little hard to see in the picture I took, but it's dirty and moldy. We don't know what was displayed with exactly, but the massive, look at me! vibe the banner gives off, plus the boldness of the word itself, implies it was a focal point designed to attract attention, and other images and phrases would be placed around it.

Both of those are unknown going off of this image alone.

The other two items chosen were a plastic teapot, for its humanizing quality, and a megaphone of German manufacture. Interestingly, his girlfriend was German, and he went to Berlin for health treatments, so he may have picked it up there.

One perspective these items cannot provide is the opinions and attitudes of the people he was targeting, such as the M.P.s, and others who may have seen him that didn't agree with his views. Such information is necessary for an institution such as the Museum that is seeking to collect all the stories associated with an event, including protest.

In an attempt to collect other sorts of information, the Museum has an agreement with the family members of Brian, in that they will give the Museum five days of their time to help document the items and share their own stories. One of his children has spoken to the Museum before (he's the one who initially called Mark Wallinger about the items), but the rest of the family has been hesitant to come forward.

Reluctance to or mere not thinking of sharing personal stories and insights into pieces given to the Museum seems to be a running issue, something we encountered when my group went down into the Costume Shop.

Ms. Behlen had laid out clothes from two counter-cultures on the table, one from a male Skinhead and the other from a female Punk. Interestingly, she mentioned that the only counter-culture items the Museum has came from the Museum's employees themselves or from their friends and family, touching on the whole issue of acquiring these pieces.

We were in four groups, three were given the task of coming up with a way to display the items assigned to them and what they would ask the donor about them, and the fourth was told to think of a subculture in our home country or town and how we would go about collecting the items and obtaining the stories of the donors.

I was in the fourth group.

Here is my idea:

In America (and in many other countries) we have an avid sports fan base. In Cleveland, our base is notable for not only being the best fans in the country, but also for having terrible sports teams, so much so that Cleveland sports are a national punchline. 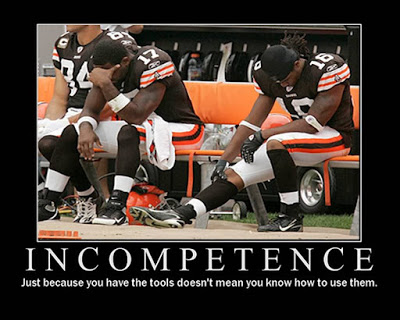 I am interested in the sports fan subculture of LOSING teams, who keep on going, year after year, disappointment after disappointment, spending money and time without anything to show for it, and who still manage to get excited at the beginning of each new season, all the while joking that the floor will inevitably fall out from beneath them. 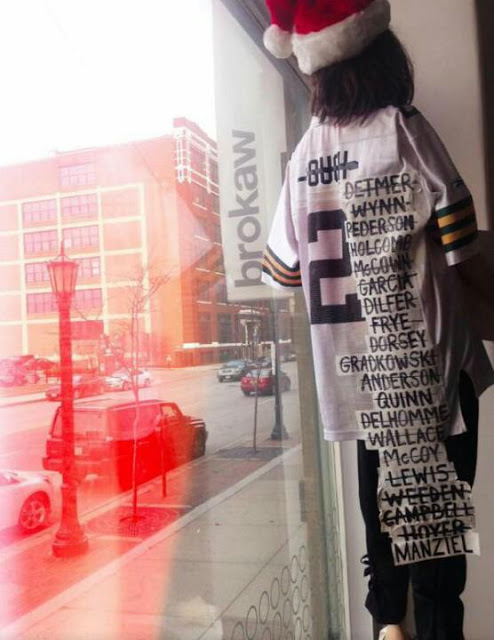 Look at that. LOOK AT IT.

The jerseys and other gear of the die-hards look like that. These are the objects that tell stories, that tell the tales of the long-suffering men and women who make up this subculture. You see a Cleveland Browns jersey anywhere, ten-to-one that person is from Cleveland, or at least northeast Ohio.

In order to collect such items and the accompanying heart-rending tales, my idea was to have a news station broadcasting the game announce that the museum is interested in collecting Browns (or Indians, or Cavs, or whatever sports team) memorabilia that is personal to them, the fans, and if anyone is interested in having what belongs to them placed in the collection to send a picture of the item and a brief description about what makes it special in to the museum. Then, if the museum chooses it, they could bring it in for drop-off and have a chance to give an oral history of the item, when they acquired it, why, and the reasons behind any modifications they might have made to it (like that jersey up there).

Museums engaged in contemporary collecting have a lot of pressure riding on them, attempting to sift through the dross and figure out what will be relevant and meaningful in the future.

Are subcultures hugely important to the time in which they live? Usually not. Browns fans aren't out there shaping the world, painting it orange, brown, and white. But they make up a big part of Cleveland, and are seen everyday, in the grocery store, at the movies, getting coffee.

And of course, lining up outside the stadium or yelling at the television.

That is Cleveland. Those are Clevelanders. And their stories are important.